Some time after Rob arrived in Braeburn Alex Buetow was in the dog yard feeding his dogs. He had by that stage been there for 11 hours trying to feed up his team ready to address the overflow on the way out.

Rob: “Hi Alex, how are you enjoying your first Yukon Quest?”

It is like Hotel California. You can check out but never leave. Something keeps drawing you back. How can I say I won’t be back next year. Yet somehow I must. As I said at the end of the last blog, as Rob left Braeburn “…the finish was literally in sight. Both for Rob and for me.”

The journey home was pretty uneventful. In fact the whole day leading up to Rob arriving in the chute was uneventful. We did some laundry. We went to Walmart. We had coffee in Tim Hortons. Nothing differentiated it from any of the other finish events I had been at.

To be honest the actual finishes I’ve been at have generally been pretty uneventful – normally only memorable for Judy Beaumont’s excellent commentary and some rest and relaxation afterwards. The fact that this was to be the first time I would experience the race actually finishing in Whitehorse did at least make this one memorable.

There were also a lot more people in Whitehorse for this finish. That was inevitable given that Dave Dalton and Riley were due to arrive just ahead of Rob. I wish now that I had taken a few more crowd photos because it was buzzing in the visitor centre before the mushers started to come in. It was different to any finish I had been at before.

Eventually Dave Dalton’s team arrived in the chute looking like they had had a tough run. Judy interviewed Dave and then we all headed back inside the visitor centre. Next Riley arrived. We had travelled alongside Riley’s team for much of the second half of the race. He was very upbeat and talking about doing the race again when it next starts from Fairbanks in 2020. Back inside to wait.

The tracker said he was in the last mile and everyone piles out into the chute. Judy gives everyone the Rob Cooke and Shaytaan Siberians back story over the PA system while we patiently wait for him to come in.

Finally his head torch appears in the distance and steadily out of the darkness emerge first Maddie and Dawkins and then the whole team behind them. 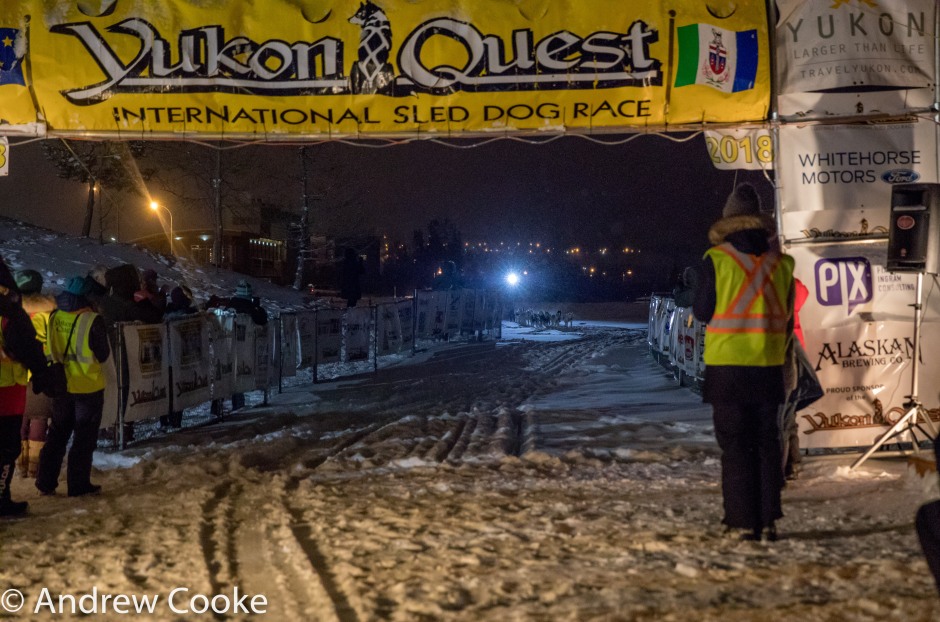 First sight of the team in the distance

Rob’s team came in looking so good as always. As he says they like checkpoints and I’m pretty sure that they knew this was the end of the race. He was pretty happy to have finished. After the difficulties getting in and out of Braeburn I think he was relieved to have actually finished.

James gives Nutter his steak – think I may still owe him $15 for half of that!

The team is out of the chute within minutes of the interview ending and then it is time to feed, harnesses off, sled loaded onto the top of the truck, dogs into warm straw in their boxes and away. 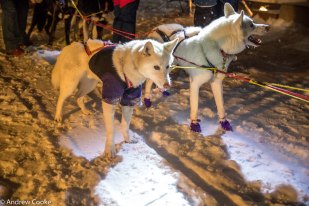 “Have you got steak?” – Finish vet checks

Rob with leaders Dawkins and Maddie

We took Rob to get a shower and then we headed to Boston Pizza for food and sleep! 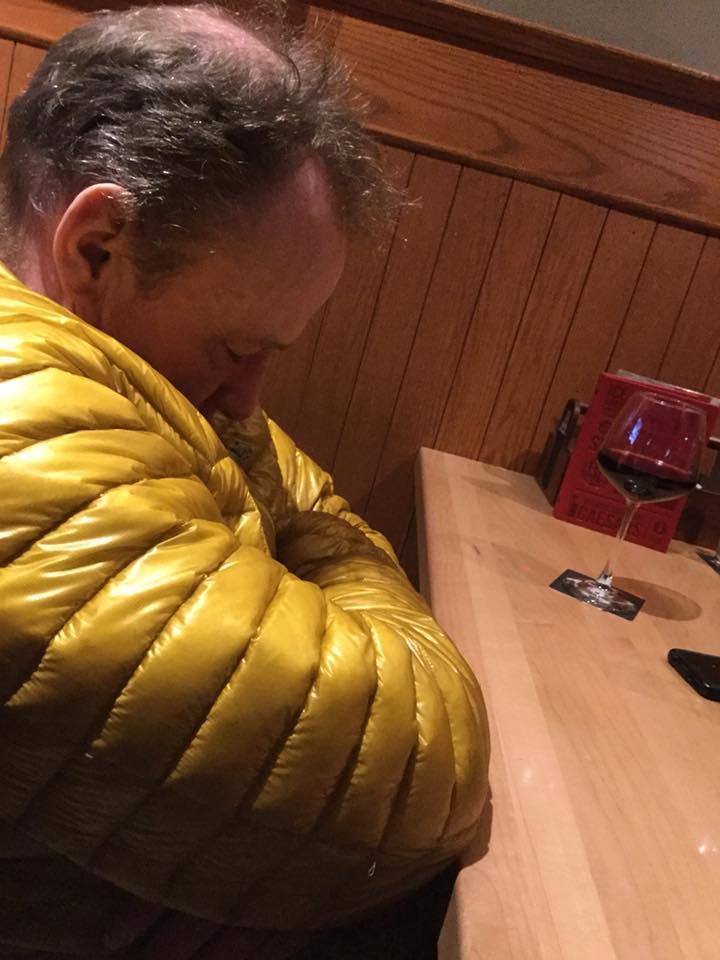 Bedding down in Boston Pizza

So it is over. Rob, James and Louise go on to Iditarod. Sadly I go home.

I travelled with less tears than in 2016, more sadness than in 2017 when my day in Vancouver was made brighter by having Cara Bissonette look after me.

I spent my 2018 Vancouver day mostly in and around the airport, writing blogs, drinking coffee and eating Wendy’s burgers and eventually having a couple of beers before boarding the flight to Heathrow.

And then it really was over.

I’m not sure when I’ll be back. It’s been a blast but all good things come to an end. More of that in later blogs – probably after Iditarod is over and life returns to what passes for normal in the Yukon.

I find this travelogue style of writing far more difficult than the random emotional musings that characterised the 2016 blogs but that style, whilst fascinating for me, becomes pretty tedious for everyone else after a (short) time. Thank you to those of you that have stuck with this stuff for three years and those of you that have come to it new this year.

4 thoughts on “The Hard Miles Home”