As we moved between Pelly and Braeburn, and heading towards what I was still then only hoping would be our third Quest finish, I kept passing another, younger, more naïve musher travelling in the opposite direction.

We passed on the Chain Lakes after Carmacks: whilst we were plodding through the heat of the afternoon sun he was running into strong winds going in the opposite direction. I could see in his eyes that squinted out from his face mask the fear and trepidation of running for one of the first times in his life into strong winds, on a long, wide and intimidating lake with a trail that he was convinced was blowing in. I passed him too as he camped with a group of other mushers who he had sought out for company; I could see the excitement and disorganisation that comes with too little camping; it wouldn’t be too long before he would always seek out solitude when camping so he and the dogs could rest more, when camping sites would be selected to maximise benefits to the dogs and tasks would be done quickly and efficiently as rest on the trail is paramount.

He passed us as we sat in McCabe Creek Dog Drop waiting for the ridiculous afternoon temperatures to drop so we could complete our run to Carmacks. He was blowing through in the opposite direction and you could see the excitement and joy in his eyes as his dogs screamed through – still with 800 miles to go before his first Quest finish.

In Braeburn, after the initial euphoria of the final eight-hour had passed, chores had been completed for the final time, final vet check successfully passed, the conversations that come with a return to ‘civilisation’ over, I was offered a choice of any of four heated rooms to sleep in.

Again I wandered back to three years hence when, struggling after an unpredictable and unpredicted night on the trail (oh how that would come to mark my racing), I had booked a bed with a checker only to discover the room full of sweaty bodies and somebody snoring loudly in ‘my’ bed. I had tried to sleep on the floor but angry, cold and uncomfortable, after ten minutes I had gone back inside the Lodge to drink more coffee and talk to friends. In Galena last year I had opened five doors onto five similar rooms before I had finally found enough floor space that would contain my contorted body – the smell, noise, kicks and being stood on as dozens on other mushers came and went no longer bothered me; sleep is king.

When the checker woke me this year after three hours of blissful, deep and warm sleep, and I awoke to euphoria as opposed to depression for the first time in twelve days, I had a quick coffee and readied my sled for the off; I learnt very early on how important it is to repack your sled as soon as the dog chores are done, and before sleep, so you and the team are ready to go at a moment’s notice. 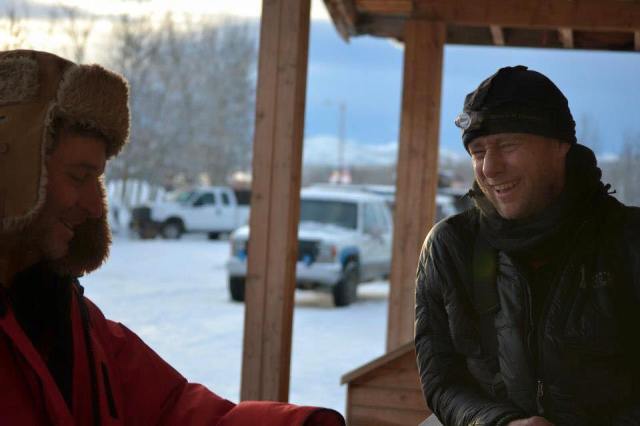 As I walked back into the Lodge with a cooler full of hot water and thawing horse meat ready for trail snacks I actually walked by Mark interviewing the younger musher on the steps to the Lodge. Despite that previous hard night on the trail I was laughing heartily then in the way that Mark could make people laugh regardless of how tired and how down they were feeling. In my hands I was twirling a bottle of massage oil that I had just retrieved from an inside pocket because I had learnt very early on that it is important to keep the few essential things in life ‘warm’ and close to your heart.

That start to the adventure now seems so long ago, and in the interim period I have changed so much. I wish I could report that I became the musher that I wanted to be but I still make way too many mistakes and the team has never really reached its full potential, the dogs are way more talented that I able to let them be. Nonetheless it has been a great adventure … a great Quest! Many, many thanks for all the support again, for those who have supported us so much since that first race to those who have given us so much support this year – I was overwhelmed by all the amazing comments in Dawson this year and I am even more overwhelmed by how many people were following us closely as we closed out our toughest Quest – you are all mad.

Massive thanks to Andy and Chris for the fantastic support along the trail – I know it is not easy (as I know that I am not easy to handle). HUGE, HUGE thanks, ALL my love and a massive HAPPY BIRTHDAY to Louise who supported the dream then and supports it now. Finally to the dogs – you are amazing, one and all; to see you bouncing into the checkpoints and across the finish line, despite me knowing how tired you are and how hard you have worked, and despite the fact that you have just spent the last twelve days with me, is a true inspiration!! Kermit would be proud!