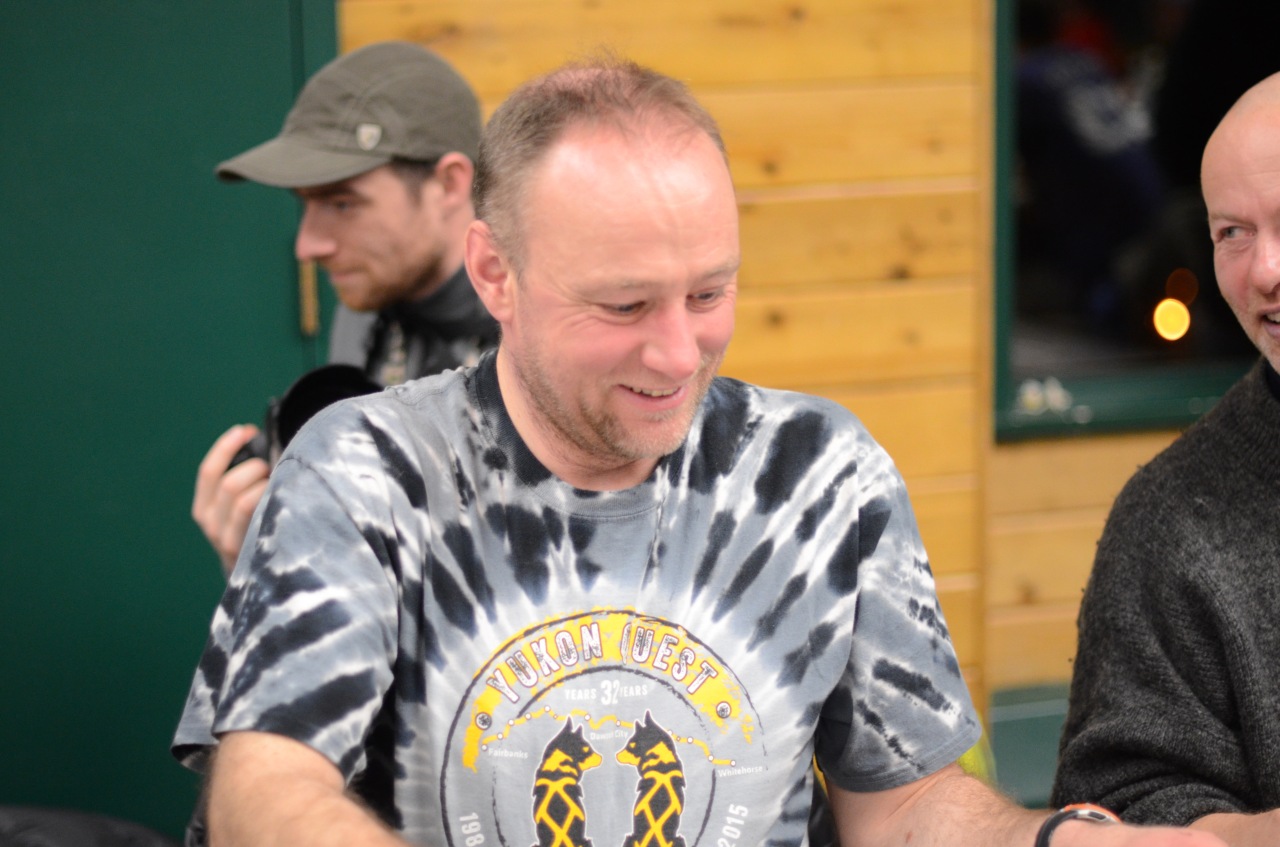 “After the race has finished” is a funny time. For Hugh, Brett, Allen and Matt it must seem like forever, waiting for the second half of the field to come home and the award ceremony to start.

For those of us further back in the pack it was a relatively short period of a day and a half. Rob rested in Whitehorse, Louise, Chris and I returned to the cabin. Chris and I celebrated with a few beers, being careful to leave Rob’s gin alone.

On Friday we had a great day of handler chores. While Louise picked up Rob from Whitehorse, Chris and I picked up pooh from the dog yard! Then when Rob got back we had to open up all the drop bags that we had brought back from the checkpoints

It is interesting when you look at the pictures above how much stuff that goes into the drop bags, and in most cases Rob has to carry, that doesn’t actually get used. Just look at all that food. The drop bags had been returned to Rob and Louise’s place in two tranches. Firstly the ones from the Alaska leg of the Quest were dropped in Carcross in a blizzard halfway through our epic road trip from Circle to Dawson on the first Thursday of the race. The second batch were dropped by Chris, Louise and I on the return after Rob left Braeburn Checkpoint on the second Wednesday of the race.

Everything was sorted, useful stuff and garbage, food and equipment, clean and washing. I sorted out the booties. We had a three quarter full drop bag of clean ones and a complete bag of used ones. 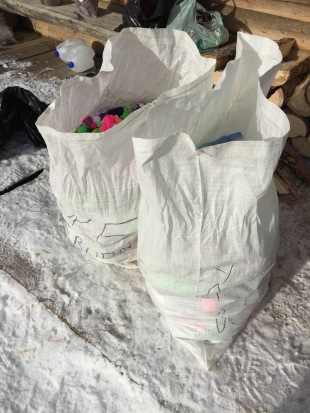 Then it was time to visit the tip, shower and head for the Meet the Mushers event. The Yukon Quest holds two of these opportunities for the fans and general public to meet the stars of the Yukon Quest. The one in Fairbanks was my very first introduction to the Yukon Quest (I talk about it in an as yet unpublished blog about the pre start events). It was interesting to compare the two events and how I felt about them. When I arrived at Fairbanks I was feeling a little bit tired but excited at the journey ahead. The second Meet the Mushers was at the end when you can reflect on everything that has gone on, the effort, the emotion, the outcomes, the friends you’ve made and the things you’ve seen. At Fairbanks I looked at people, heroes, I’d only previously seen in pictures on the internet. Allen Moore, Brent Sass, Hugh Neff, Matt Hall, Mike Ellis and so on (and of course Robb Cooke).

By the time of the Whitehorse event I had now met these heroes several times and there was a little bit more of the routine about the event.

Yuka Honda with Seth Barnes in the background 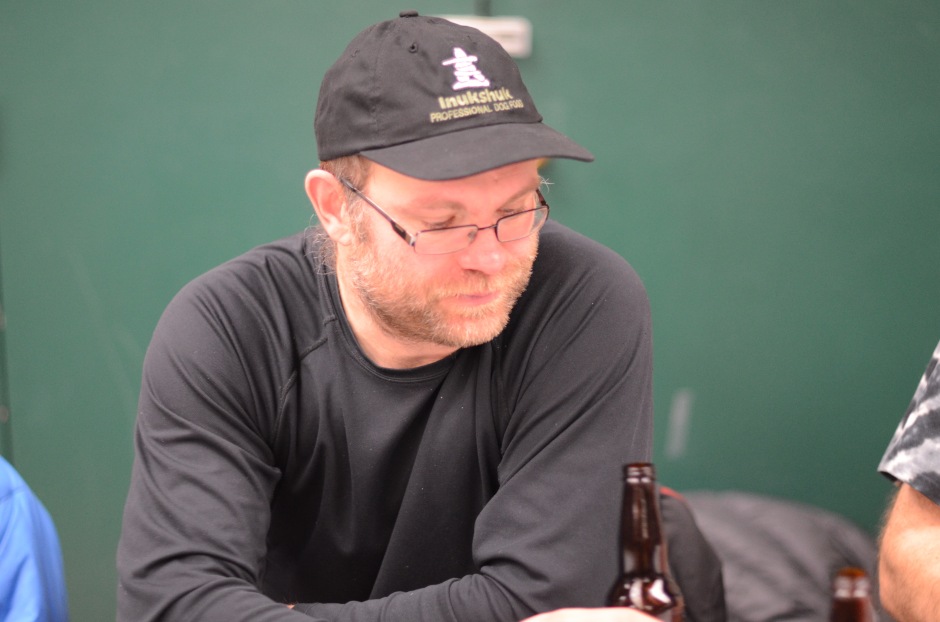 Chris, Handler Number One,  had his evening made complete by getting his photo taken with former champion, Aily Zirkle. There was some jealousy in the room and mocking suggesting of disloyalty. 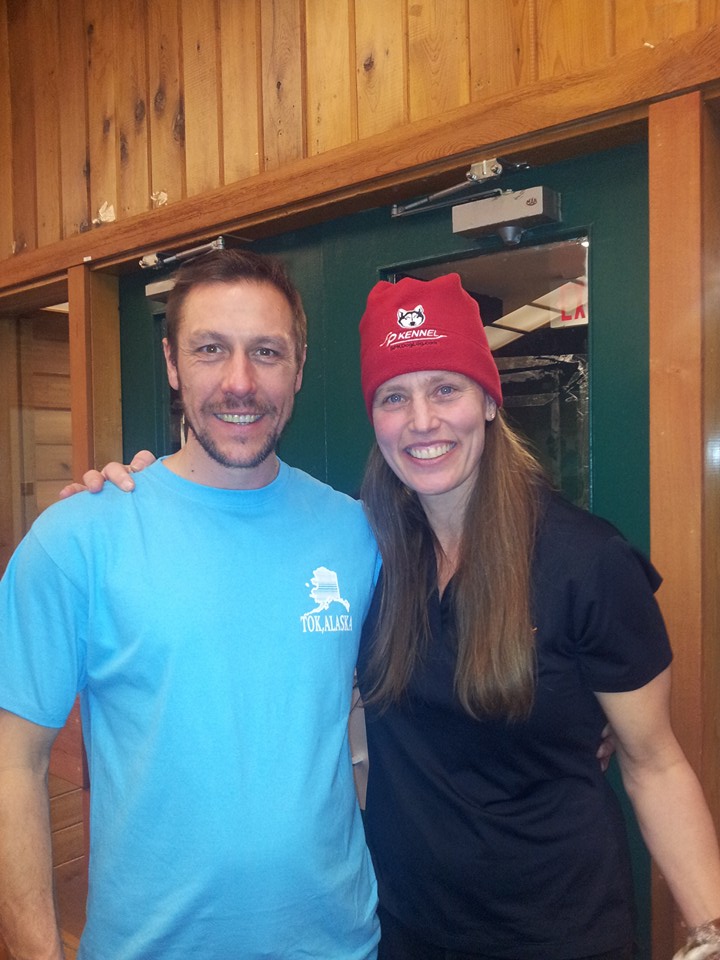 We were there to support the musher putting on a show for the public. And that’s what we did. And then we went home and drank some Cotswold Gin actually to celebrate.

Saturday was pretty frenetic, even by the standards of life on the trail. We had planned a morning run out on the two man sled but that had to be abandoned as we didn’t get up too early and Rob had a series of mushers meetings in Whitehorse ahead of the banquet. Chris and I took the opportunity to go to our hotel and get showers and packed in preparation for going home. Rob also had to get his washing done, sign some booties, buy some provisions and be at the banquet by 5pm. Well, it did all get done at double time. Though I did however forget to take my camera to the banquet and as a consequence photos from here are taken by on my phone so apologise for the slightly lower quality.

We did get to the banquet by 5pm and joined a queue waiting to get in. There was a silent auction and look whose picture was on a cushion being auctioned, Nutter on the 2015 Yukon Quest poster. 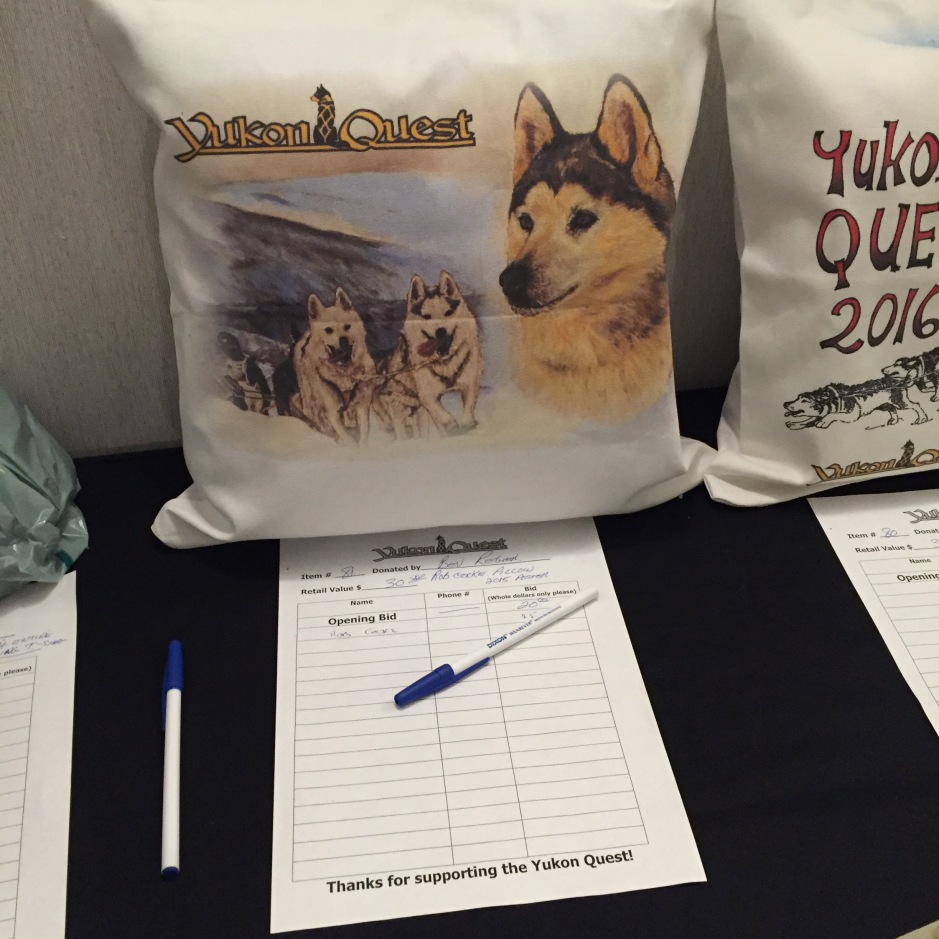 The evening began with the mushers being paraded into the hall behind the Canadian Rangers. We had a great table with, in addition to Handlers 1 to 3 and the musher we had Krys March, Judy Beaumont and Martin Haefele and Lynne Cheverie. We had a lovely evening that in addition to featuring can can dancers, supported by a very hot looking Gaetan, we had Rob’s speech and Hugh Neff’s winner’s acceptance speech with supporting cast of First Nation dancers.

Can can dancers at the Awards Banquet

Everyone had great stories to tell. Allen Moore was particularly entertaining telling how he turned his sled over in overflow water on the river because he got his feet caught in the clever device he had created to arrest his speed coming off  Eagle Summit. Seth Barnes explained how Allen’s wife (Aily Zirkle) had helped him recover his team from a ravine. Seth had thought he had a rookie with no knowledge helping him only to find it was a former Yukon Quest champion.

Sebastien Dos Santos Borges handler closed the evening by bravely climbing up onto the stage to talk about the dog Sebastien had lost in Carmacks and to thank everyone for the support they had given Sebastien.

We went back to the hotel and sampled yet more gin. However the musher was tired and we were soon a party of three rather than four! 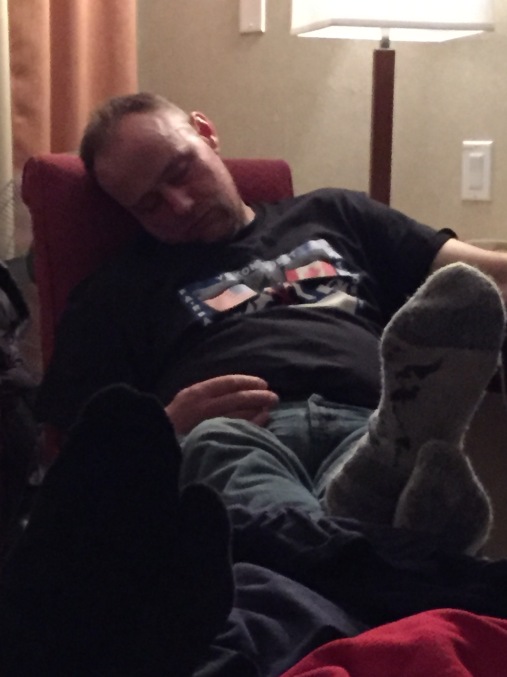 Chris, Louise and I went to bed and that was it. Now it was really over.

All that was left for me was to get up on Sunday morning at 6am and head for the airport. My dream was over, at least in 2016 but Rob’s would continue.

“The other race” is only two weeks away and the next stage of his dream was about to start. On to Iditarod for Team Shaytaan with a different support team, Hugh and Judy Wakker.  They have the pleasure of continuing to help Rob drive towards a dream that had its genesis more than fifteen years ago in Breague in Cornwall, travelled through Yeovil, Ponders Bridge, Shubenacadie, through New Brunswick and on to Willow and Whitehorse. And it continues.