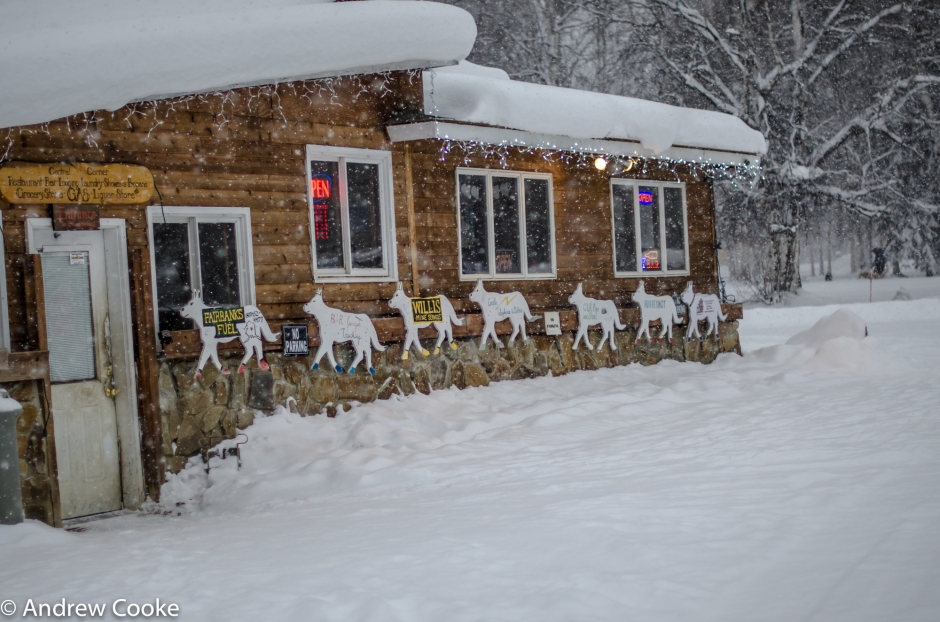 So the last blog left the story after a short stay in Circle with Rob arriving in tenth place and leaving in in a very positive frame of mind. My apologies to those who felt I cut the story a bit short there. As I now, as last year, find I have to back track on the Alaskan side of the race for lack of internet and time to write I’m trying not to make these too long and heavy.

We returned to camping in the community centre for the night and after an excellent breakfast from Chef Joe in the checkpoint we headed for Central. We had a special guest for the 30 mile journey as photographer extraordinaire, Julien Schroder, had hitched a ride with us to Central as the his car had gone on to Central without him.

We were in Central a couple of hours before Rob. Rumours of the coming storm were already circulating. Rob had camped for four hours on Birch Creek between Circle and Central which and Dave Dalton had passed him during that time. Dave hadn’t camped but only got in to Central still only arrived in Central two hours ahead of Rob. Dave had got in to Central before Rob and when it looked like Rob, and Brian Wilshurst just behind him,  were about to arrive we went outside and hung around and waited. 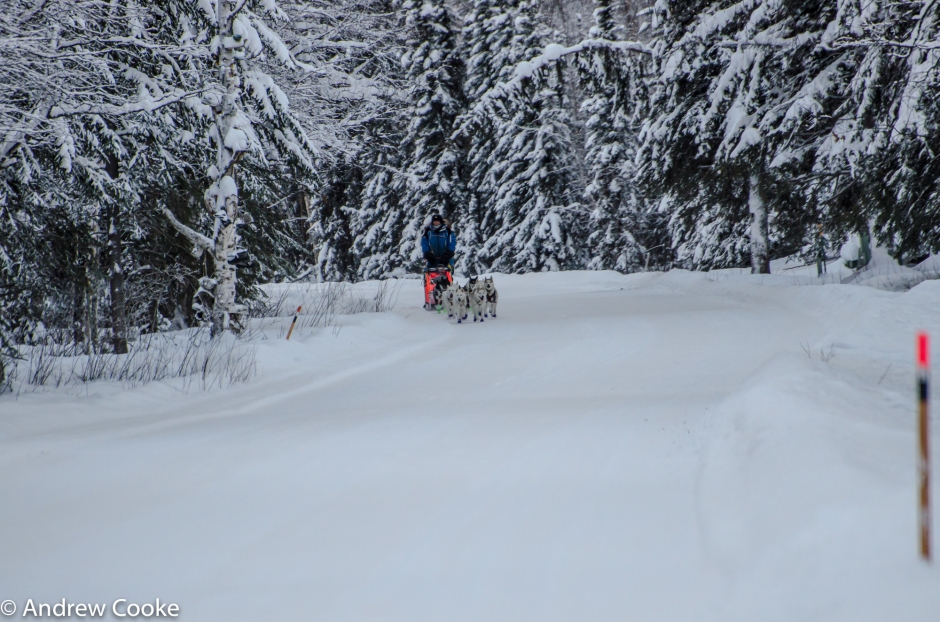 The team of course looked fantastic. Furthermore they were clearly going very fast. Our wait was down to the reliability of the tracker data rather than the speed of the team.

The theme of this race has been how fast a Siberian team can be and how great this team is. The team came in looking fantastic. They were excited and, as always, looking like they were ready to blow through the checkpoint rather than rest in this one. It was a sign of how fast the team came in that I actually couldn’t adjust the camera fast enough to be able to catch all the images I wanted to as he came in.

Rob checked the team in and went to his parking slot in the dog yard, despite the team looking like they were ready to carry on over Eagle summit to Mile 101 straight away..

Brian Wilmshurst followed Rob in a few minutes later. Whereas Brian’s team also looked good it was noticeable how much faster the “slow” Siberian team were running compared with the team that ran in before and after Rob’s team..

Meanwhile while Rob was parking there was yet another fracas in the team, this time between Bering and The Slug who had both found some snacks that a previous team had left on the ground in the dog yard and were having a slight disagreement over whose they were. Once that was settled the vets started the regular checks which included checking Loonie’s eye for a small abrasion resulting from the previous fracas out on the trail. These fights had been something of a feature this year. Aside from the publicised fight between Psycho and Loonie there had been probably half a dozen further fights out on the trail or in checkpoints. Maybe a sign of a more pumped team, one that is better rested or possibly one that is just more competitive than normal. 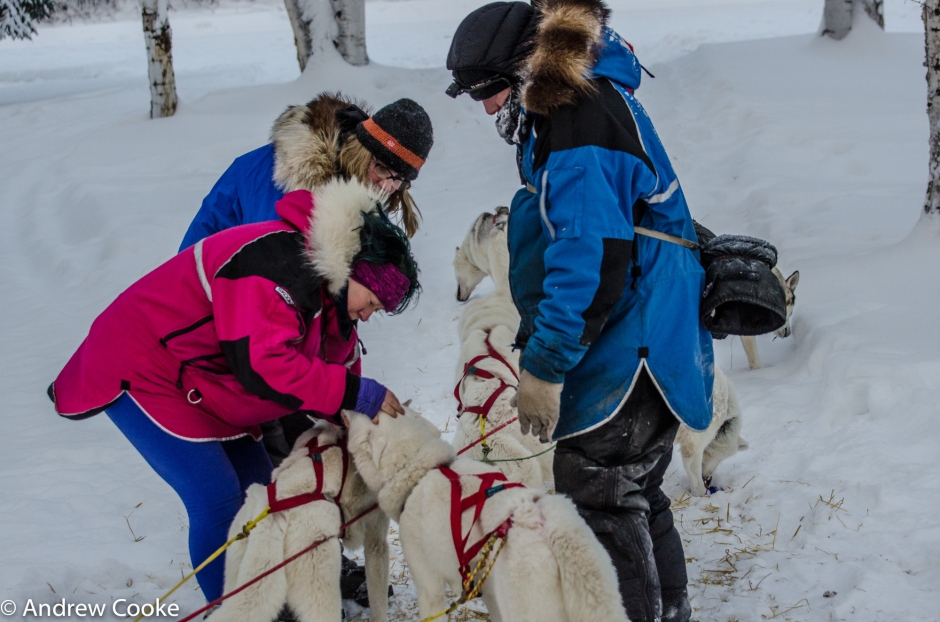 After completing his normal cycle of dog care activity Rob came in for food and rest. By this time the storm reports had gone from rumour to weather report to personal experience. The checkpoint team from Circle arrived en route to Mile 101 and were reporting that they had been told they shouldn’t continue along the Stees Highway over Eagle as the storm had already blown in.

The three mushers in Central, soon to be joined by Sebastian Dos Santos Borges and Ben Good and Gaetan Pierrard would arrive in the early hours. They all agreed that they would hole up in Central overnight and all look to leave together as soon as they could the following morning. They retired to the Mushers sleeping area and we got a bed in the Central “Motel”. We certainly slept in a lot more actual beds this year than in 2016 and less in the truck. This has been part necessity and part convenience. I’ll cover the differences between 2016 and 2017 another day but it is fair to say 2017 has been a much smoother, if not necessarily easier journey. 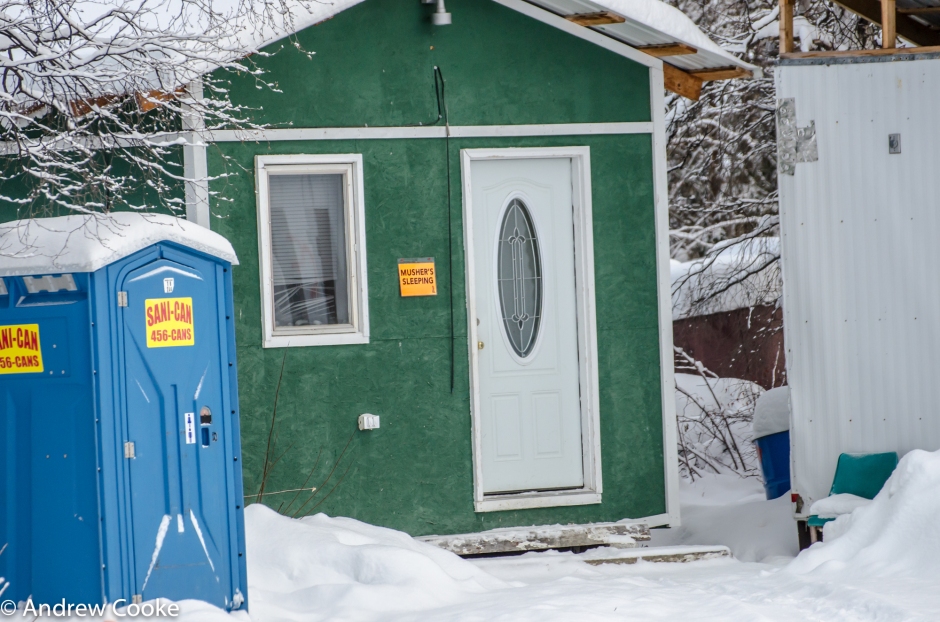 Morning came very quickly. By 6:30 all the teams were in the yard, bootied and ready to go.

We, the handlers, worried that the enforced lay over had concertinaed the teams together and Rob might lose his advantage. He seemed to have no such concerns.

What we now got was a form of “Le Mans start”. Brian and Rob left in quick succession followed by Dave Dalton fifteen minutes later.Ben Good and Sebastian were to leave shortly afterwards leaving only Gaetan behind.

As the picture below of Rob leaving shows Fairbanks was only 125 miles away by road now, just under 150 trail miles, though the next 28 over Eagle to Mile 101 were going to be some of the most challenging on the race.

As it turned out this was also to be one of Rob’s best runs of the race and possibly his best over Eagle ever. Not that Julien’s excellent photograph below makes it look like he enjoyed it much though Maddie and Psycho running in lead clearly look like they are.

The handler team had packed up and shipped out of Central earlier that morning after another very nice breakfast.

We stopped for the perfunctory photographs on the top of Eagle. We spotted an empty vehicle left at the summit. For a short time we worried who the driver was and where they had gone. Then we realised that it was Julien’s car and he was on Eagle taking those very pretty photos including the one above as well as the, now famous, video where Rob threatens to punch him, or kill him, or both. 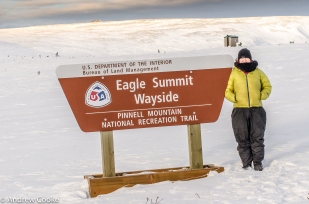 We got to Mile 101 not long before Rob was expected. Somewhere over Eagle Summit on the short 28 mile run between Central and Mile 101 Dave Dalton had got in front of Brian and Rob. On the tracker it looked like he was three or four miles in front. Sure enough Dave arrived first but he had barely got into the chute when Rob appeared on the inbound slope behind as you can see below.

Once again the team looked fantastic. Dave Dalton pulled out of the chute to let Rob pull in. When the handlers went to park him Dave announced that he was going straight through the checkpoint and on to Two Rivers.

A major feature of this race was that the Shaytaan team demonstrated that, contrary to the stories that many people like to put out, a good team of Siberians can consistently run faster than some experienced Alaskan teams. In going straight through Mile 101 Dave actually recognised this and the strength of the Siberian team coming up behind him. It was a tactic that proved successful as Rob wasn’t ever to make up the time on him that he was going to spend resting in Mile 101.

As it was Rob parked in Mile 101 and announced he was staying until 15:00. This became 15:30 and he finally left later still having been sucked in by the allure of Mile 101 bacon. By this time Dave Dalton wad nearly five hours down the road to Two Rivers. 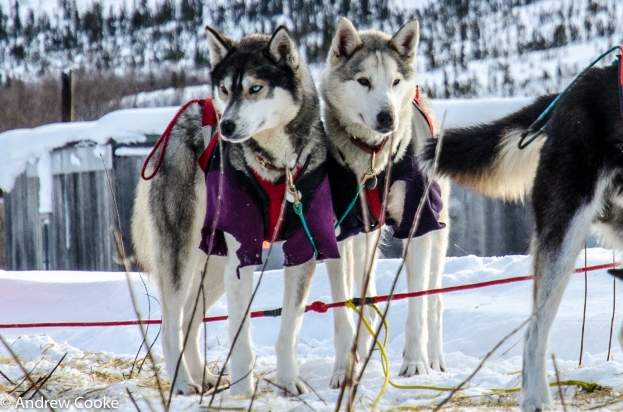 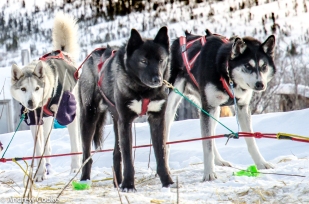 Still essentially running together with Brian Wilmshurst, Rob left Mile 101 at around 15:45. We all knew that the pattern was now pretty well set and without major storms or other dramas the race order wasn’t going to change again.

After the usual 40 minute wait we raked up straw and got on our way to Two Rivers. The end is very much in sight. It’s almost a feeling of sadness rather than one of joy, but I’m learning that it is like that most years at this stage.