This is one of a number of posts that have been uploaded a little after the event due to the packed schedule at the start of the race. I am posting them because I think some people may still be interested. Well at least I hope that’s the case!

So after four days of preparation and very enjoyable social engagements from meeting mushers to very nice lunches and race banquets we finally got to start day. This meant decamping from Melinda and Chris’ very comfortable cabin and actually heading out on the trail. Here comes three days without a night and definitely without a bed.

In an unheard of fit of efficiency the Shaytaan team got to the start muster area before nearly anyone else had shown up. Sausage bagels and coffee on board, the dogs were dropped, harnesses sought, safety pins procured to fix bibs to bags and the sleds were removed from the roof. There were a lot of photographs and videos being taken too, far too many to be posted up here but some are worth seeing.

Ninja Max is always worth seeing of course….

The excitement in the team was audible – literally

We had discussed who would ride the “tag sled” a number of times. Chris had the “pleasure” in 2015 in Whitehorse. We had discussed it at some length before Saturday and very kindly had deferred to me this year.

Once Rob started booting up though the nerves took a grip on me. Not only did I have to make sure I didn’t fall off, I had to look after Rob’s QuestGuest, the mayor of Fairbanks’ twin town in Italy!

With hindsight I am not sure why I was fretting about my 15 minute pleasure ride when Rob had a 1,000 mile extreme experience ahead of him…..but I was.

That was all forgotten very quickly though. Rob came down. He pointed to the metal bar and said “You know that’s the brake don’t you?” I said “Yes, but I’ll only need it at the end so I don’t run into you won’t I?” He said “Or if I fall off.” I used and said “What the hell do you mean if you fall off?” But that was lost as he was on the sled and the dogs were barking.

There is a sudden jerk as the snow hooks and brake are released. Even on what is effectively for Rob a pleasure ride the rush of adrenalin for me was fantastic.

We set off at a gentle pace to begin with…then there was a sudden apparent acceleration and I watched Rob lean over hard to the left and drop. The one thing I knew for certain at that point was that the mayor and I were going to! The tag sled followed the main sled, lurch to the left and drop down onto the river and descend what seemed like 20 feet in very quick time. We were pulled over onto the left runner and the main though going through my head was “stay upright and keep the passenger in the bag”.  As suddenly as we’d swung to the left we were getting back upright and we were on the frozen river bumping over ice, particularly under the road. 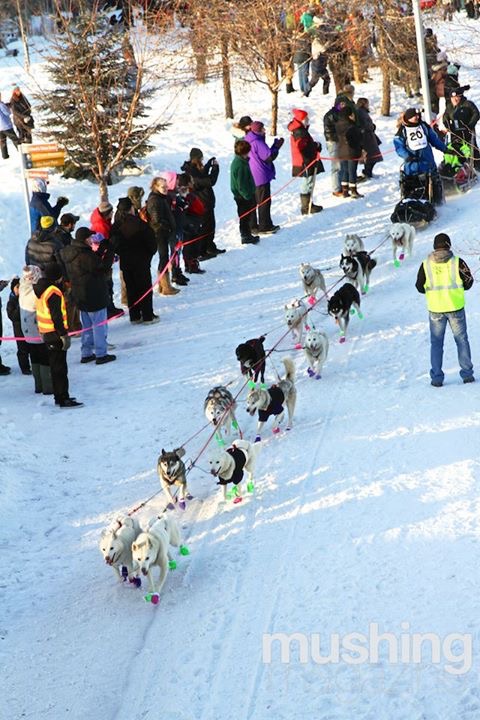 Leaving the start with me on the tag sled

If you’ve never seen a video of a start you can find at the very least Rob’s 2013 start on YouTube somewhere. It’s an amazing experience running along with the crowds calling out and as the crowds thin out you have the incredible beauty and peace of the iced over river, the snow covered conifers either side and the soothing sound of the dogs out in front. It’s magical. My passenger called out molto benne and bellissimo a number of times. I shouted to Rob that now I understand why he puts himself through so much for this.

It was all over too soon. The pleasure ride ended and the real trail begins. I got off the sled and helped my passenger on to the path. I turned to say goodbye to Rob but he was already gone and 50 yards down the river.

I’m so honoured to have had the opportunity for that experience and so proud to sit behind my little brother at the start of YQ 2016.

That’s the end of the short adventure but it’s the start of the big one.

5 thoughts on “Making it to the start – Rivers, runners and riders”