This is part 1 of the “Dawson Report”. We have been here for three days so there are inevitably plenty of stories to tell.

My last post left the story with Chris, Louise and I sat in Dawson watching the tracker with Rob camped on the Top of the World Highway. What we suspected then was that he’d run into difficult conditions and had camped for the storm to blow over. The reality of course was far worse. What actually happened was that he had climbed American summit in atrocious weather but got to the top to find the highway was completely hidden under a “white out”. Snow had drifted across the road and completely hidden the trail. Where there were trail markers they were obliterated in a snow drift or they were so covered in frost as to be invisible.

The team became confused as to what exactly they should have been doing. As Rob says, they didn’t ‘shut down” (ie sit down and refuse to go further) but they just stood and looked at the featureless track in front of them and didn’t know what to do next.

Again what we didn’t know was that Rob had been walking along in from of the team for a number of miles. He is lucky to have a team where just about all of them can lead. He changed leaders several times but no one wanted to go forward. They just stood and looked. At one point Rob turned round to find no team behind him. They had got snagged 100 yards back down the trail and were stood waiting for him.

Eventually he decided to stop and camp and see out the storm on the top. We knew none of what was actually going on but he appeared to be resting so we went back to bed and slept until 8:00. Slowly he started to move. Then faster and faster. He was on his way. By 9:00 we were at the Yukon Quest visitor centre waiting for him to arrive. There was a rush of folk in the visitor centre getting on coats and parkas and heading outside. 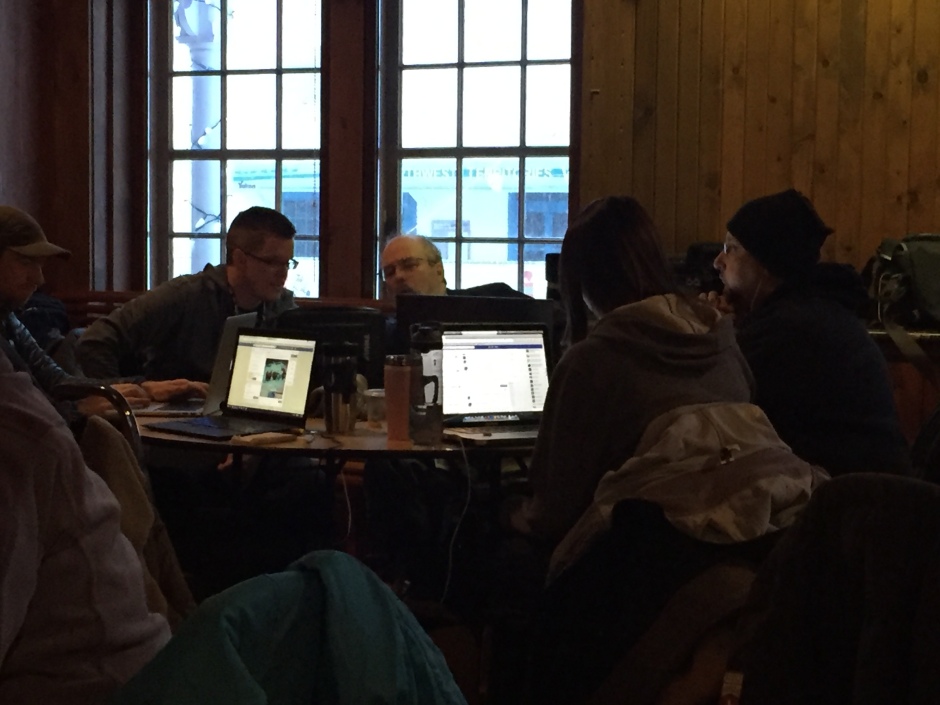 Scott Chesney and the Communications team

I was determined for some action photos. I headed up the trail. I shouted to someone “Is he coming?” They pointed over my shoulder and I turned to see Skits and Looney bearing down on me at the head of the team. I did mange to get off the trail and into position to take the photo you see at the top of the page.

Any “sporting event” presents its challenges to the competitors. That’s the whole point.The Yukon Quest though is a special mix of man and dog, environment and terrain. I’m pretty sure that anyone reading this will have seen the interview with Rob. Most of you will understand the emotion that comes with actually putting your life on the line but being responsible for the lives and welfare of the dog team in your charge. You can’t just put that in a box and ignore it, not if you’re human anyway. You will have seen all that come out at Dawson. It just shows the passion the mushers feel for this race and what they do. 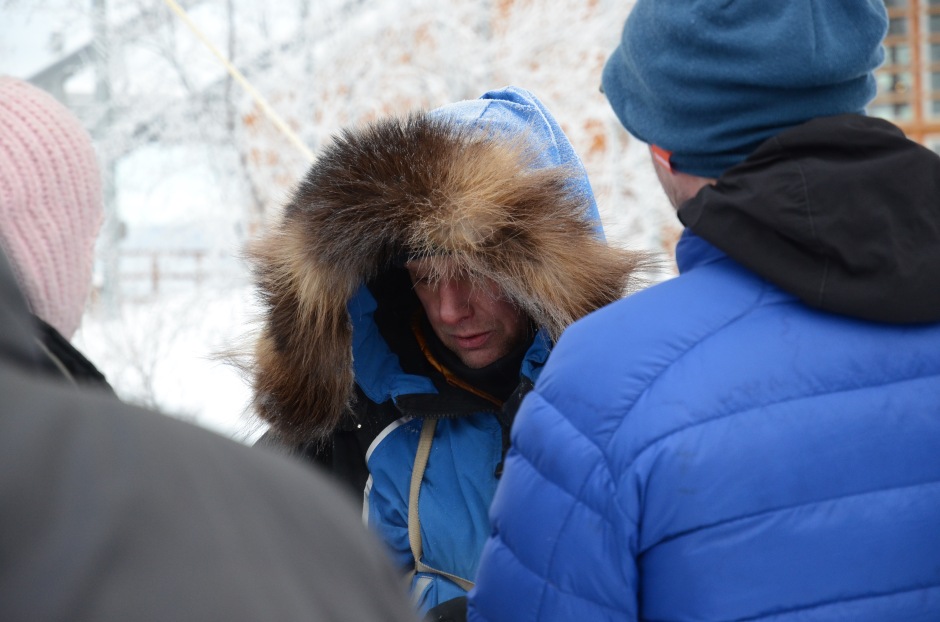 Rob being interviewed by the press

While Rob was being interviewed Louise congratulated the dogs and I snapped away with my camera. The dogs looked just great. They were admired from every angle.

The dogs had struggled on the Top of the World but now they were ready for whatever the Yukon Quest would throw at them. They were at the end of Part 1 of the Race – Alaska.  Now for Part 2 – The Yukon.

8 thoughts on “Part 1: The arrival in Dawson: relief, rest and recovery”