Spot the irony here. I have made it very clear for most of this blog that it is an expedition rather than a race for the second half of the field. But bear with me and you will see what I mean.

So I left you at Dawson and went back to talk about the journey of 1,000 miles for a musher being 3,000 for the handler.

This post returns to the story on leaving Dawson and heading south down the Klondike Highway towards Whitehorse. Rob had a very long run from Dawson, via Scroggie Dog Drop, to Pelly Crossing which was why we could take our time clearing the camp. After a week I’ve got the art of clearing up straw, Chris is a two year veteran and Louise is a Ninja at it. We actually managed to clear the Dawson came very efficiently but it was still a coupe of hours before everything was cleared and packed in the vehicle.. We created a monster pile of straw but fortunately that was all collected by the local team. 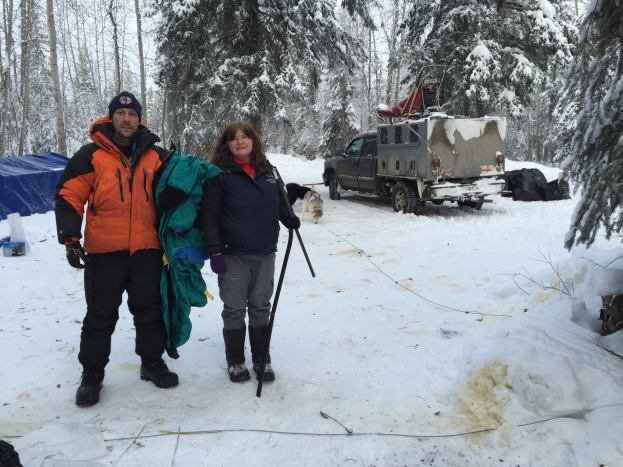 Handlers #1 and #3 admire our work

Rob had dropped Ammo in Eagle before Dawson. He was struggling with the pace and he felt it best to rest him. He had had a more exciting journey than the handlers in getting to Dawson though having been stuck in Eagle because of fog (you can only fly in and out of Eagle) and then gone to Fairbanks before being flown eventually to Dawson. He was none the worst for wear though and joined Gussie, Rob and Louise’s pet bear dog, in the truck for the journey to Whitehorse.

So our next stop was Pelly. We got in probably three or four hours before Rob was expected and got some precious sleep on the floor in the gym. We set our alarms for an hour before we expected him. We woke to find the tracker showing that he had barely moved from the Scroggie dog drop. He had been stationary for nearly two hours. Once again the anxiety that set in that long night in Dawson raised itself again. It took Louise to notice that everyone appeared to have stopped. SPOT had chosen this time to do maintenance on the tracker system. Phew.

Rob came in looking good and nearly as cheerful as when he left Dawson. He and the team were definitely tired though. He bedded the team down and got some sleep. So did we. 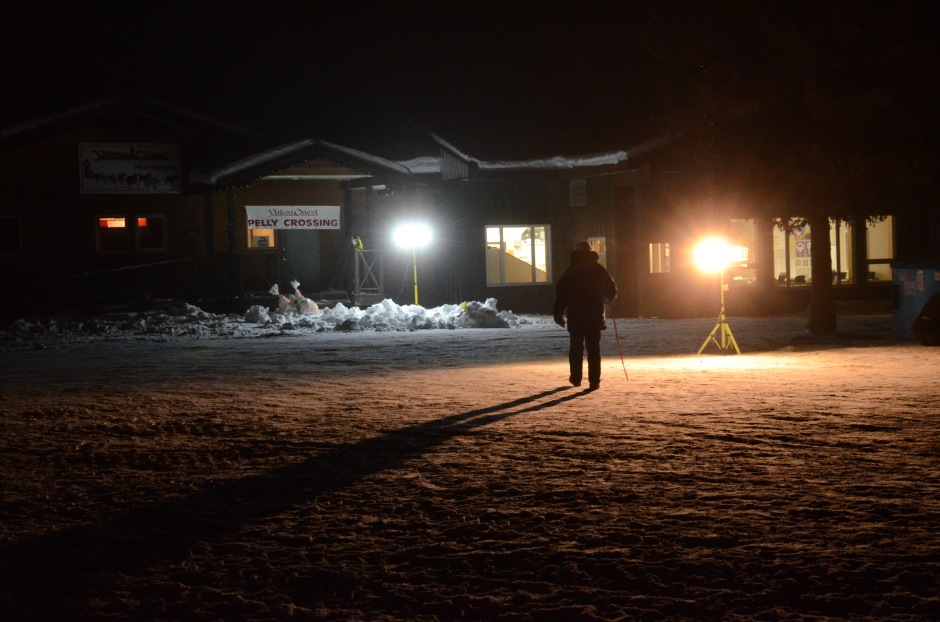 Pelly checkpoint and John the vet from Dawson

Chris is sticking to his knitting in Pelly checkpoint

When he rose Chris stoked the bonfire, Louise and I watched him prepare and Rob changed runners on his sled. Then he was away – video is here.

We cleared up in double quick time and then we were away again heading for the next stop, McCabe dog drop.

Rob arrived into McCabe in good spirits and the dogs looked really good again. There is a video here of him coming in to McCabe here. The horse in the field obviously wanted to play. His only complaint was that it had been warm on the trail. He was planning a short rest before moving on. The weather had other ideas though and as the hour’s rest wore on it got warmer so Rob decided to stay. A couple of hours into his stay Tore Albrigtsen came in. He had been following behind Rob since Mile 101. He took his chance in McCabe to pass the Siberian team and deciding to take a shorter break, took to his sled and was away. Yes, there is still some race in the event, even amongst the back markers. Rob waited for the right time for his dogs to leave. He was never, it turned out, to catch that time back up again.

Relax, it’s too hot to go

Once the afternoon heat died down Rob took a very good looking team out of McCabe and on to Carmacks. We cleared up and left straight away.

Our next stop was Carmacks.

I appreciate this blog seems to now be running very quickly but that is actually the way time was now going. We were in Carmacks two hours before Rob. Chris went for some sleep. I started this blog. Louise tried to see what was happening on the tracker.

Rob arrived suddenly and sooner than expected. Louise and I were outside waiting for him. We completely forgot to wake Chris who was sleeping somewhere in the gym. Rob arrived and bedded the team down. He went to the sleeping area, Louise and I got ourselves coffee. In a comedy moment Chris arrived with boots and coat in hand ready to welcome Rob in. He looked at Louise and I and said “Don’t tell me he’s already here….” It provided entertainment for the rest of the trail.

We did all go out to watch Rob booty up the team and leave Carmacks. There was also a nice Aurora Borealis show that evening and it presented the one chance I had on the trip with the tripod to capture it. 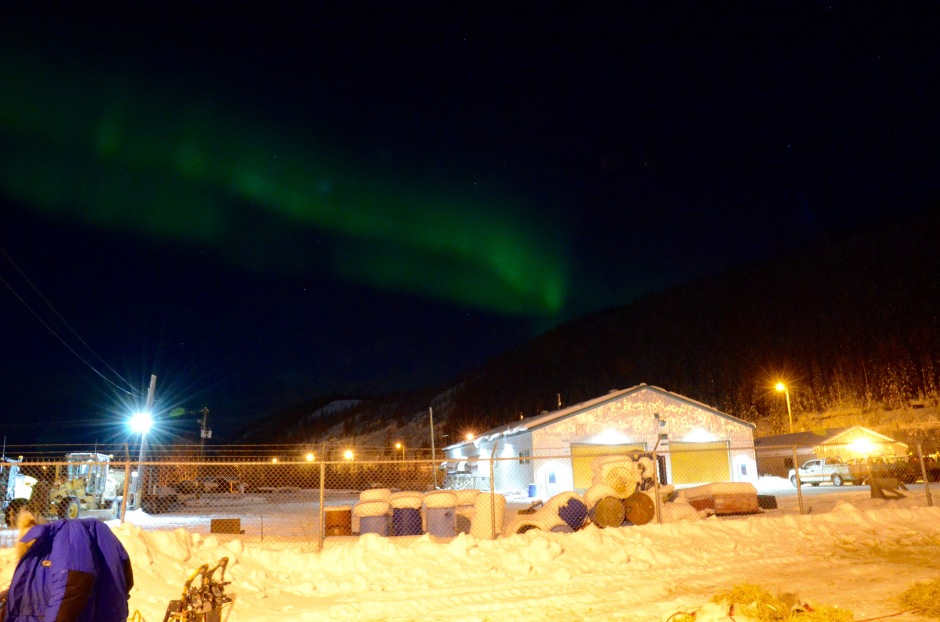 Straw cleared, out of Carmacks and on to Braeburn. We managed a few hours precious sleep in the gym at Carmacks before moving on though because that was the last chance we would get before the finish. It was now Wednesday. Since leaving Dawson we had been on the road for 72 hours and had slept for between 8 and 12 of those.

We arrived in Braeburn in the late afternoon. Braeburn Lodge produces legendary enormous meals including cinnamon buns the size of a loaf. Great for the musher, nice for the handler. Rob arrived as the sun went down. Braeburn is a mandatory 8 hour rest before the final run to the finish.

He slept, we snoozed in the chairs in the restaurant. Not really sleep. He went out on the eight hour point. The next time we would see him would be at the finish line.

That will be the next instalment to follow very shortly.