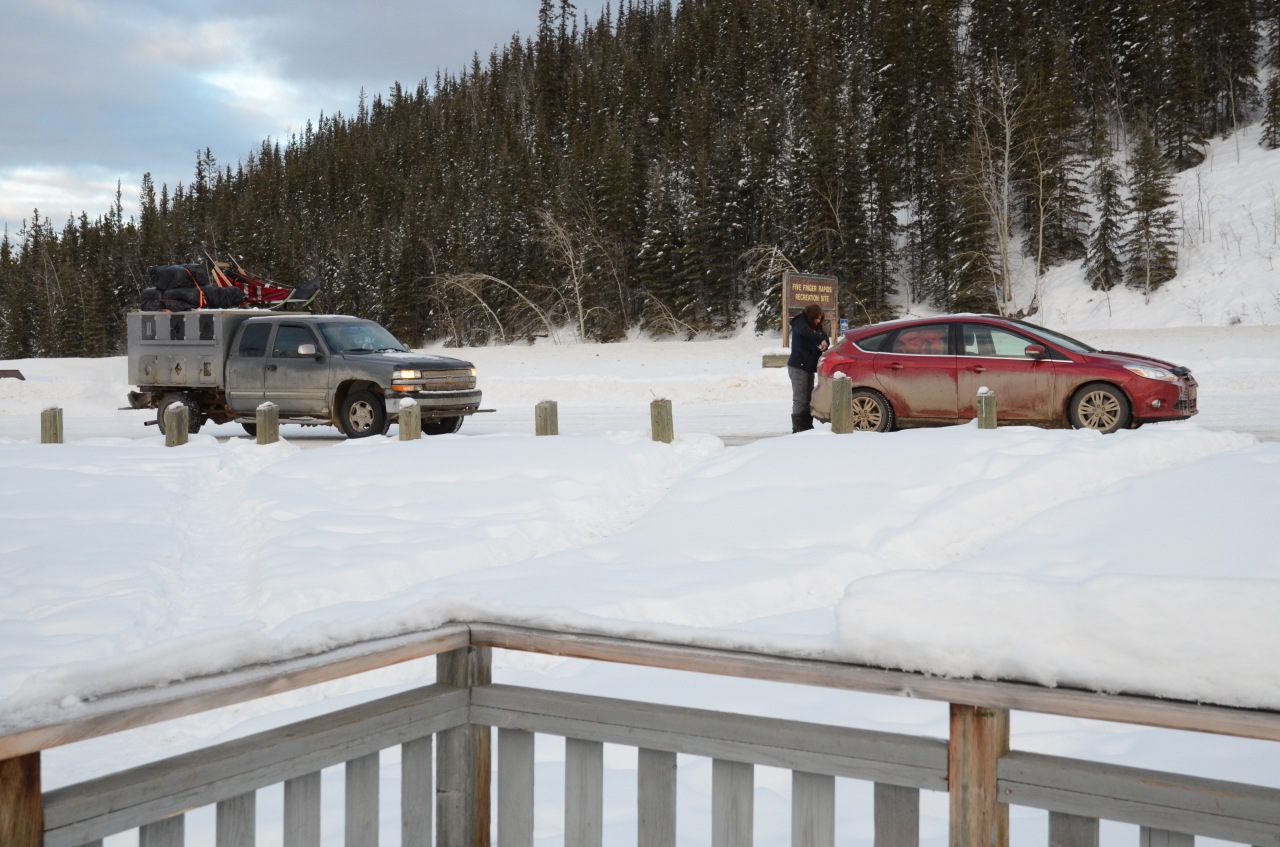 “It’s useful to go out of this world and see it from the perspective of another one.”

This started out as a blog specifically about the gargantuan road trip from Circle to Dawson, via Carcross, but got delayed by the more urgent news of what was happening outside, and then inside, Dawson.

I have returned to it now after a couple of days and I wanted to complete the story of that journey but also broaden it into a more general reflection of road transport in Alaska and the Yukon.

For all sorts of complicated reasons I missed out on the first road trip of the 2016 Yukon Quest by flying straight in to Fairbanks rather than joining Rob and Chris at Whitehorse. Therefore I missed out on seeing Lynx and Eagles. However since then I have covered just about every other mile we have travelled, mostly from the passenger seat.

Rob said to me before I came out that I lived in a small country, as I was about to find out. Well let’s just deal with that first. No matter how many times I visit North America I never cease to be amazed by the vastness of the terrain and the space and distance between places. On this trip this was never going to become more apparent.

Once the race had started in Fairbanks we needed to get from the centre of the city to Two Rivers, notionally still in Fairbanks. This was a journey that took us over an hour. Having left Two rivers in the early hours of Sunday morning we had to get ourselves to Mile 101. Mile 101 must be one of the most beautiful stops on the Yukon Quest but it is the “start of remoteness”. It was a four hour journey from Two Rivers to 101. We left Two Rivers around 2:30 in the morning driving through the night without stopping we got to Mile 101 twenty minutes after Rob arrived. The Shaytaan team are parked just out of shot in the picture below. 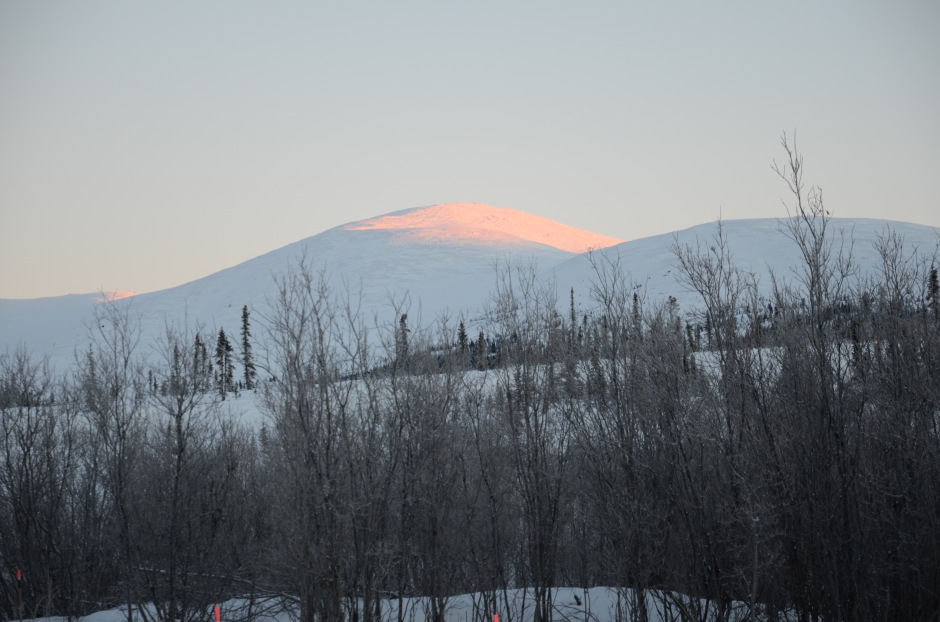 Those early checkpoints were quite challenging for Rob but also challenging for the handlers. After 101 we would have another significant, if slightly shorter, climb over Eagle Summit to Central.

Rob finally left 101 and we left for Central. Once again while he was battling over Eagle Summit with the team we had a parallel car journey over white roads across to Central Checkpoint, another three hour journey. It was a smooth journey in reality even though, as you will have read from the earlier posts, I had only managed around an hour’s sleep in the last 48 and was struggling mentally with the reality of what the Quest was throwing at me. I consequently didn’t feel in my most positive frame of mind despite what must be some of the most stunning scenery, so much space and the freshest air the world could offer. The depth and the vastness of everything is awe inspiring. 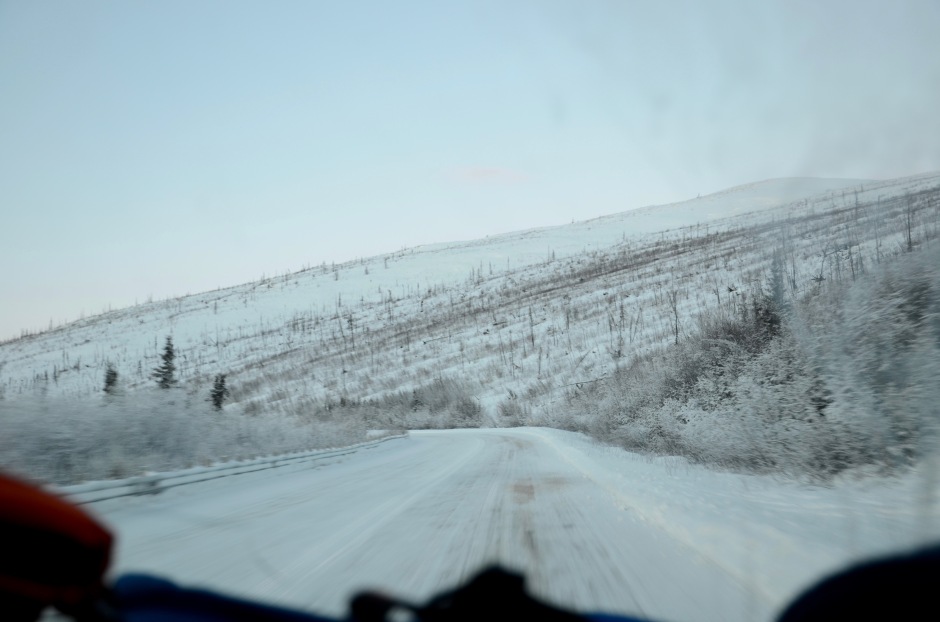 We were in Central for a little less than twelve hours before we were off to Circle. Circle is a slightly shorter trip but much more interesting. It took us from 02:30 tie 04:30 to get to Circle. The road is pretty much just ice all the way. The video of a short stretch is here.

By this stage we had Tanq, Psycho and Nyx were with us by now so not only did we have ourselves to look after but we had three dropped dogs as well.

So we are now in the early ours of the third day of the race. The race has been going 42 hours and we have spent sixteen of those in the dog truck travelling (and just about three more sleeping). Circle was in a way a break. We had a few hours rest before Rob arrived and then after he left we slept on mats for a joyous six hours sleep. Then starts the biggest trip of the Quest for the handlers. While the musher travels to Dawson through Slavens and Eagle dog drops the handlers have to get there by road. For us this was an mammoth twenty two hour trip. We had of course to stop every five or six hours to exercise and feed the three dogs we had with us. We stopped at the unmissable Fast Eddie’s at Tok and then got down to the Canadian border crossing around 11pm. Still there were seven hours to Carcross. 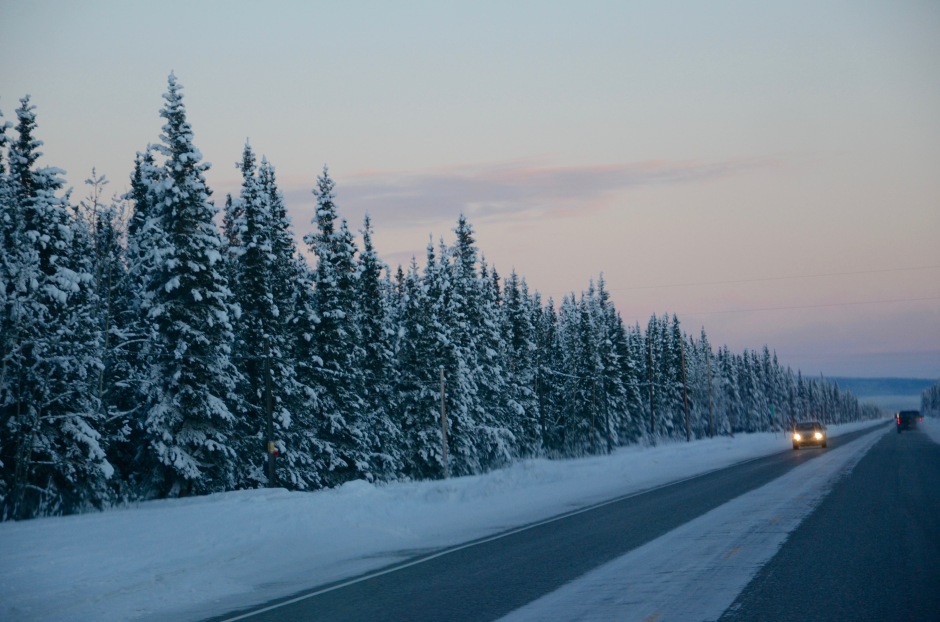 The Alaska Highway – heading back to Whitehorse

The distances we cover are immense but even during the day you see very few other cars, at night you see pretty well none at all. We turned onto the Klondike Highway towards Carcross and after ten minutes the truck started to cough and then stopped.

Run out of fuel!

In our defence the fuel gauge on the truck doesn’t work. Fortunately we have a Jerry Can. We got to Rob and Louise’s cabin at 6am. We rested until 12:00 the next day and then we set off for Dawson. This was another seven and a half hours to Dawson, another 600 miles just to get to the next checkpoint. The trip to Dawson was relatively uneventful – except for freezing fog which meant we had to pull over and scrape ice off the windows at regular intervals. We arrived into Dawson at 1am on Thursday at 01:30 in the morning.

By this stage, not exactly halfway through the race we had covered 1800 miles. Our musher, who had rather more problems of his own at the time, was to come into Dawson the next day having covered 519 miles which is where my Dawson blog begins.

The roads we’ve covered are for the most part white with snow or hard with ice. You rarely see much road surface. Chris has done a fantastic job doing most of the driving. For those of us that live on a small island the vast distance you cover on a trip like this are almost unimaginable. If you live in North America you will just be wondering what the devil I’m talking about. Oh well. On the road again to Pelly Crossing! 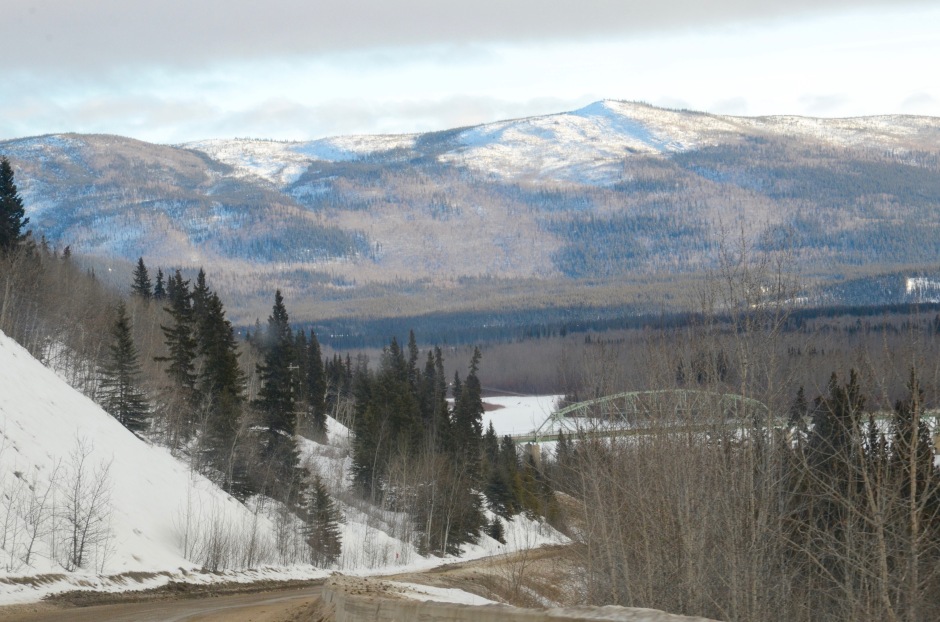 4 thoughts on “The long way to Dawson – Regrouping, road trips and refuelling”