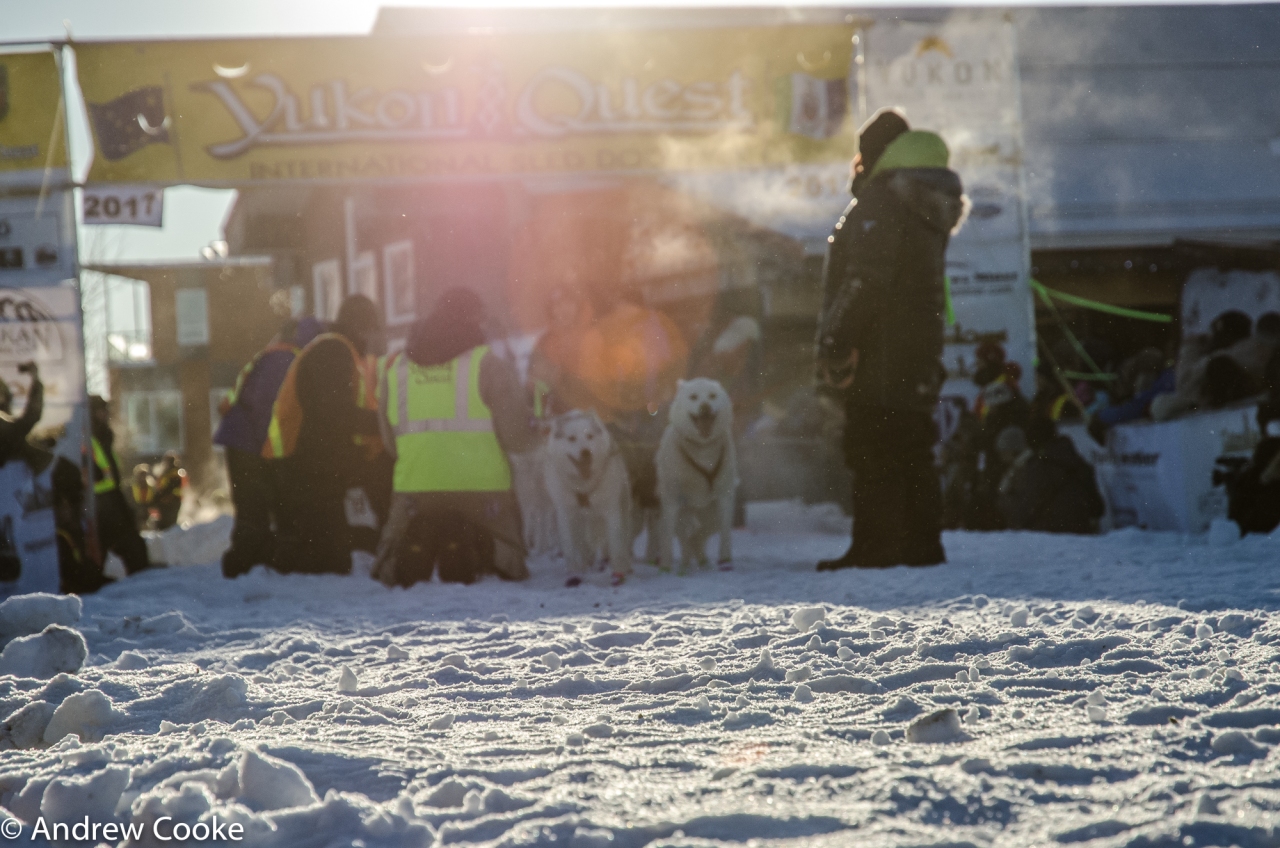 All that stuff I talk about in the run up to the start is all very well and good and is very important for the spectator value of the sport but for us the fun and the work really begins when the race gets under way.

As my second start I sort of knew what to expect this year but still I learned so much more not least because after Rob left I, along with Chris and Louise, helped Torsten Kohnert to line out his dogs and lead them down to the start as well. A double handler day.

The teams all collect in Shipyards park, down near the river and line up their trucks at set parking spaces according to bib number. As we were bib 4 and out pretty early and had a good parking spot. All went very much to plan. Officials checked sled bags and vets checked dogs and all was good. 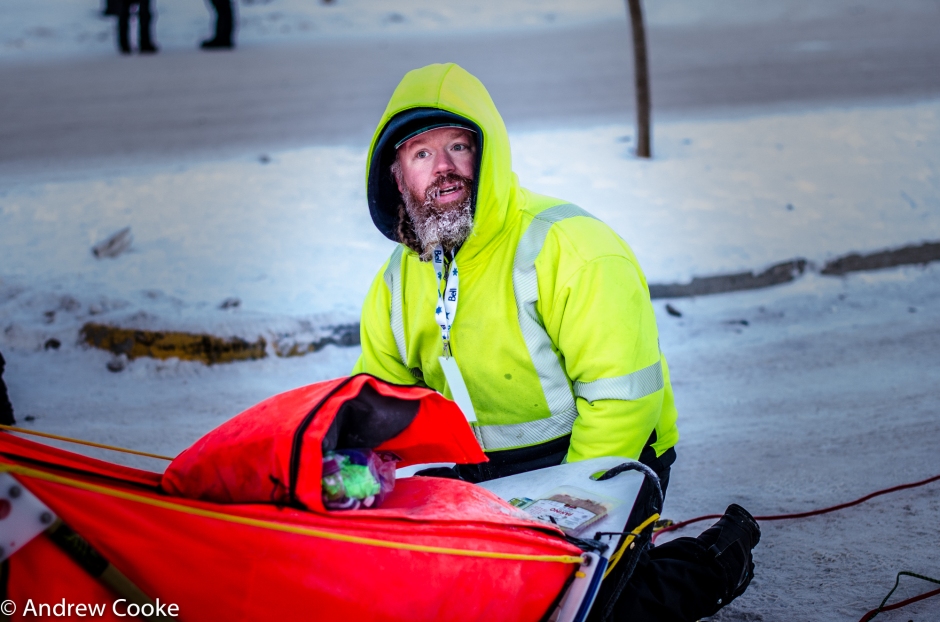 Again this year Rob had a set of booties carrying messages from the local schools. Each dog was to wear one of these for the start and they will be preserved afterwards as a momento of the race. 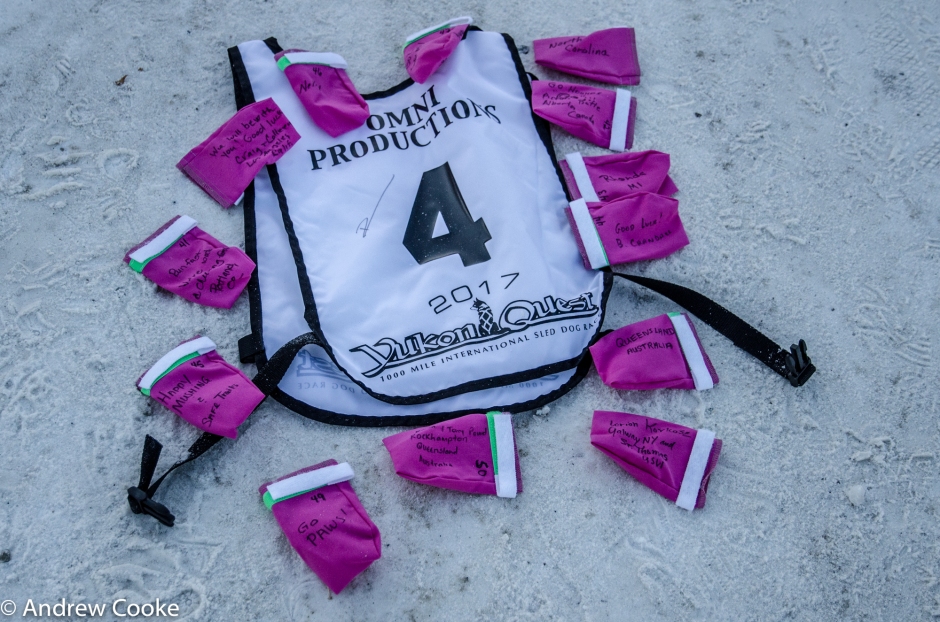 There was as always lots of interest in our team because of the sheer beauty of Rob and Louise’s dogs. Spectators gather round and photographed the team. Even though Ninja Max is not there this year to steal the show there is lots of interest in all the team. Psycho, Nutter, Nyx, Ammo and of course, The Slug, all attract a lot of interest. 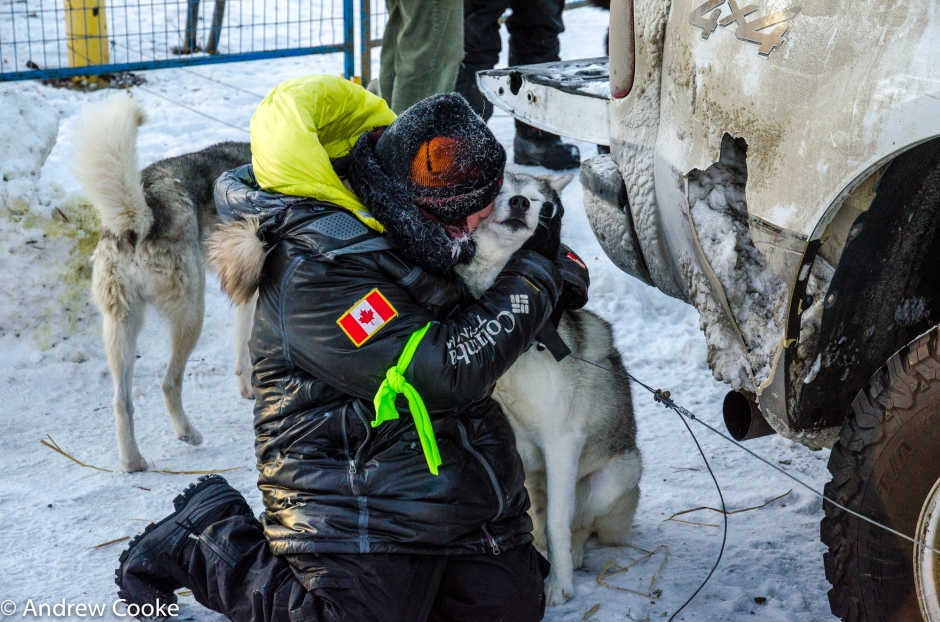 We were parked right next to the great Allen Moore and Aliy Zirkle’s SP Kennel team. Aliy expressed her admiration for our team, particularly the dogs feet. She was demonstrating to me the benefits of our dogs’ larger and more furry feet, especially when compared with some of their dogs smaller and balder ones. Allen’s dogs are noticeably smaller than Rob’s team but as Aliy acknowledges they are extremely strong. 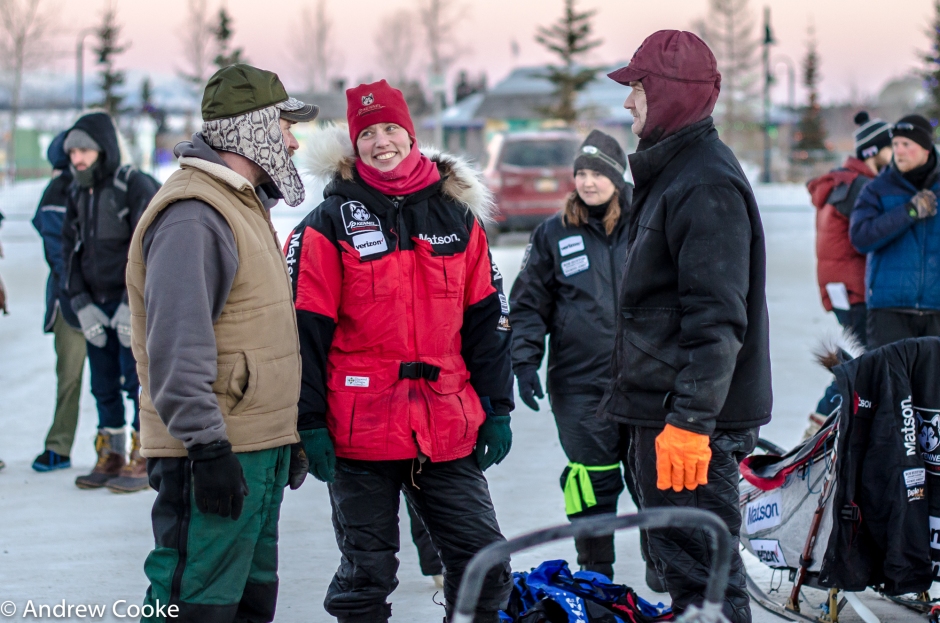 The team is harnessed and bootied. They are lined out and secured in front of the dog truck. Then it was time to lead down to the chute. We follow rookie Ben Good into the start and wait. You would think that the excitement at this point would be overwhelming. It is, but its tempered by a sense of foreboding for what is to come. If the dogs are nervous it doesn’t show. They’re pumped and steaming. 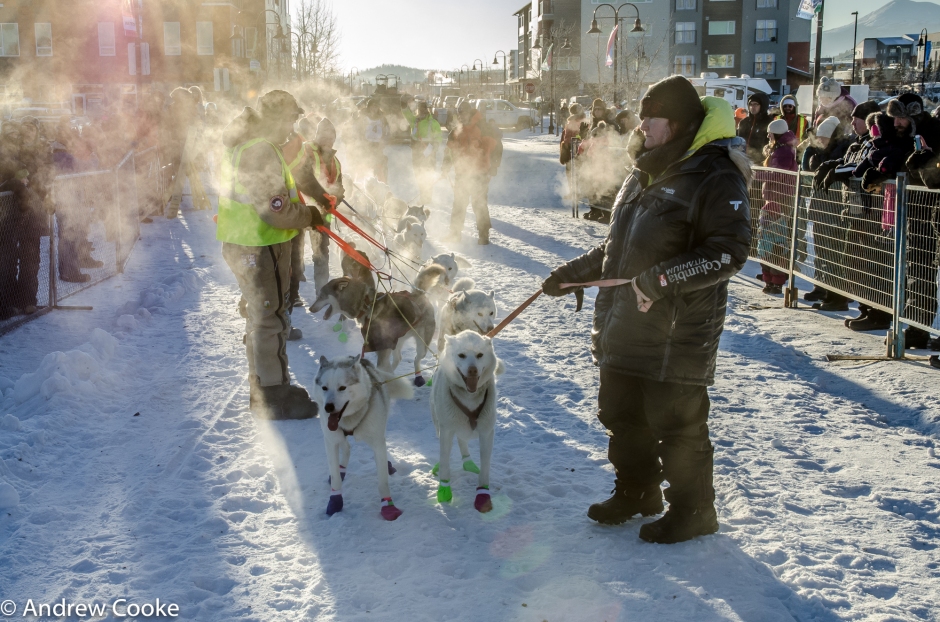 Ben left the chute to a chorus of whooping and we moved forward to the start position. 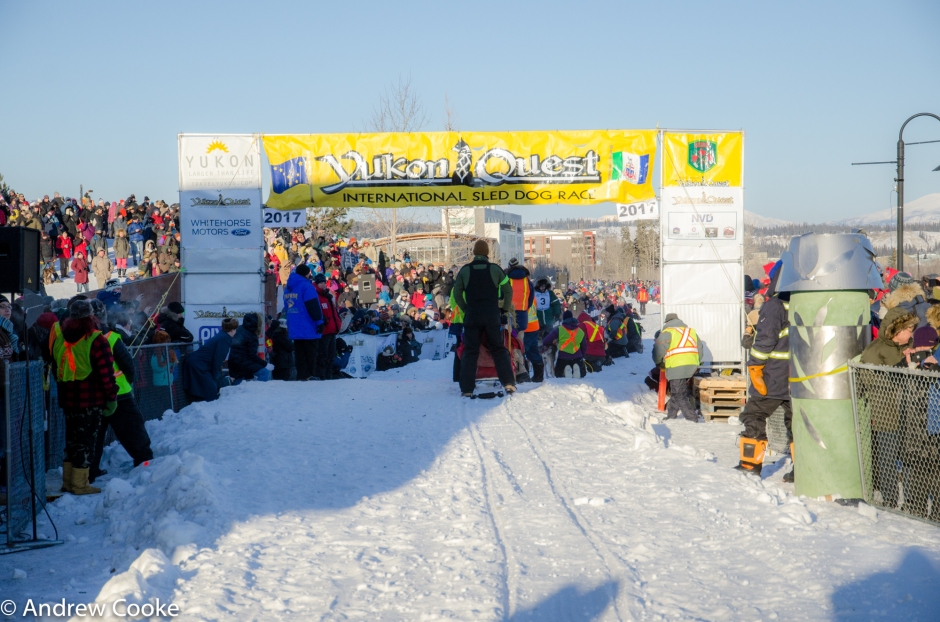 The sun shone  down in our eyes but the instructions still boom out. Time to take the tethers off. The countdown starts. “Ten, nine, eight, seven….. ” We get to “two” and the handlers step away.  There is a huge crescendo of cheering from the everyone, particularly the British and Whitehorse contingent. 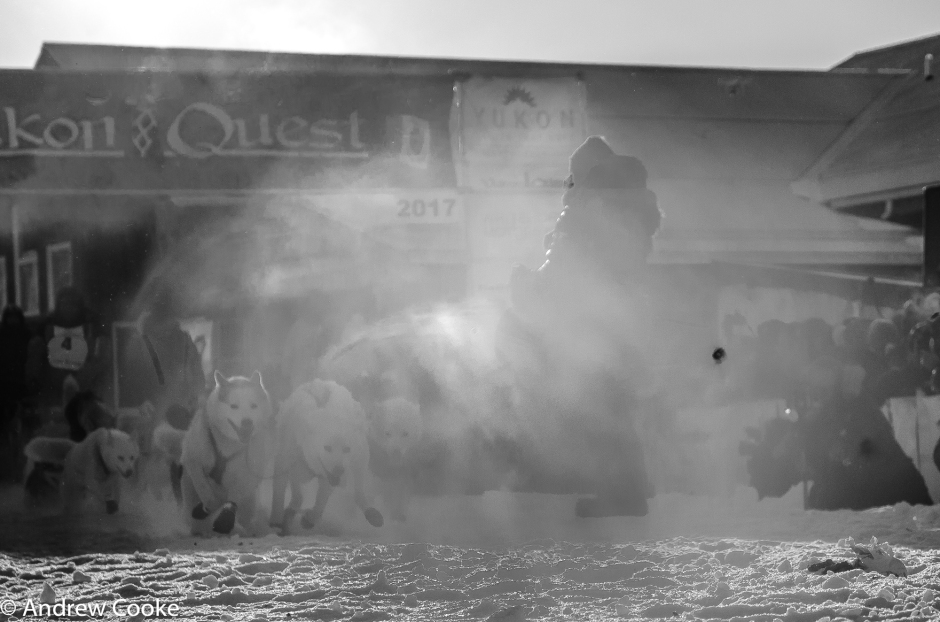 Off the team go down the Yukon river. The next time we see them will be at Braeburn Lodge. We pray for a great run. So many pre race challenges and injuries but the team look really good. They are great dogs and this is a great team. They will do well. 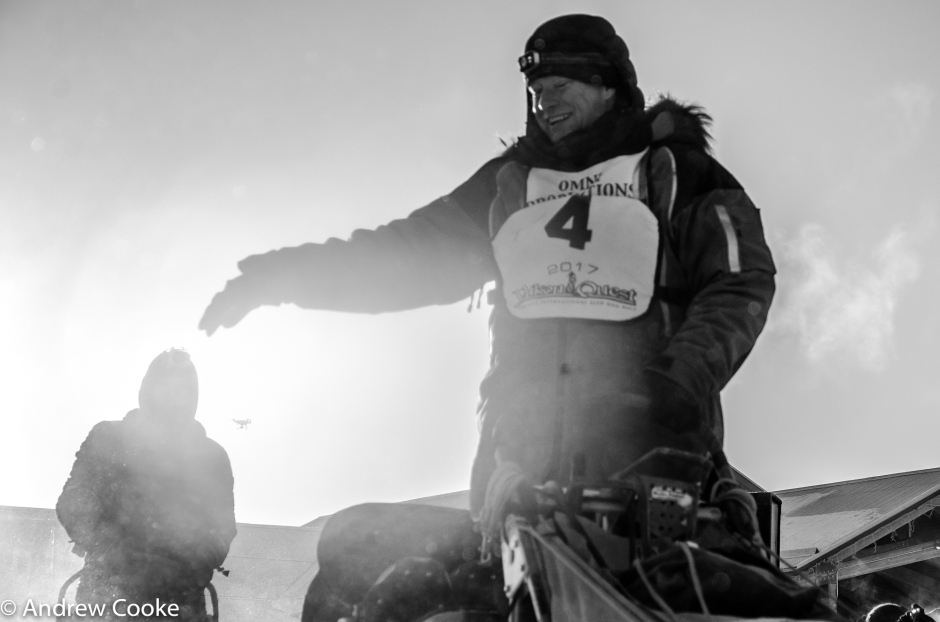