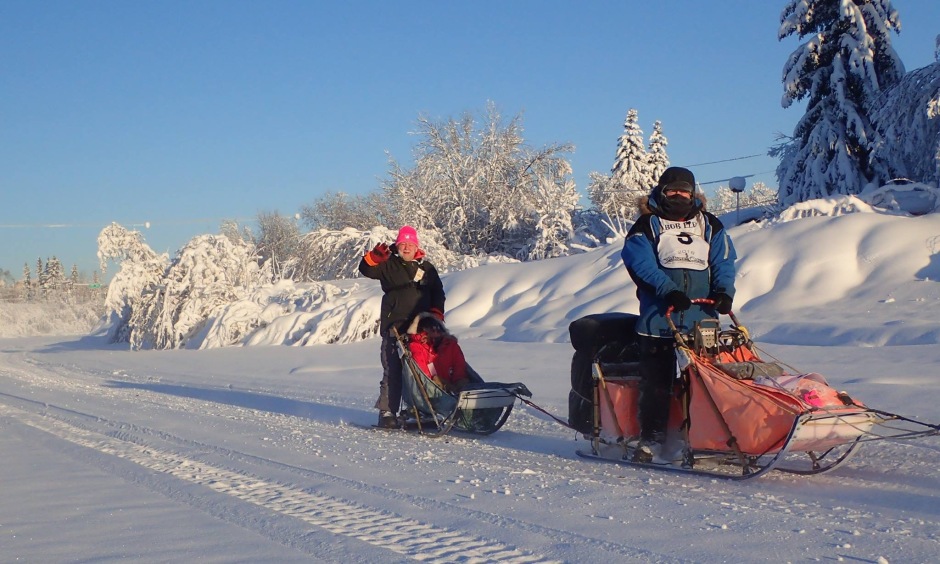 I have struggled throughout the three year life of this blog as to whether the story is about me, the team, or the race. Generally I find I write a lot of self seeking stuff about me, then try and translate that into what if means for the team and more broadly the race as a whole.

It was just me that it all decided to go wrong for really and this one really is my story of the start.

This year was my turn to ride the tag sled at the start. I have to admit that this had been worrying me for the week before hand. Don’t ask me why? It had gone OK when I did it in 2016 although the drop onto the river was a bit of a shock and involved hard work to stay upright I and my Quest Guest had a good run. So why was I worrying?

Because Rob has so many fans it always slightly chaotic harnessing and lining out at the start. Unlike in 2016 though everything became very rushed at the end and before I could think about it I was on the tag sled and we were moving towards the start line.

In preparation for my subsequent defence I should say here that firstly this is Melinda’s sled and not Rob’s normal second sled (though it is possible that the reason for that is that I forgot to pack the sled bag for Rob’s sled).  I had noticed earlier looking the sled that the drag mat, the device used for light braking and steering, was secured in the upright position and I detached it and put it down. That is my story and I will be sticking to it later under considerable pressure.

When it was suddenly time to head to the start line I jumped on to the rails and didn’t look closely at anything else. As we ran up to the start I was too slow onto the brake and managed to to slide into the back of Rob’s sled when we got up to the chute area. Still I didn’t look down and consider what might be not quite right about the sled.

I actually have some excellent Go Pro footage of the whole ride from jumping on the sled to jumping off and I will publish that in its entirety later (it’s 2.85GB) but that gives a really nice feel for what it is like to ride the start. Rob says that he will NEVER watch it!

Suddenly the count down started, the nerves have gone and we are about to go. The announcer gives the usual story from Rob’s profile as to why he is doing the race is “because Louise told him not to”.

At this point I had still not noticed that the drag mat that had been down earlier was now once again in the upright position. One important control mechanism on the sled is not there.

Five, four, three two, one….. and we are away. Off we go. It all feels so much more controlled than in 2016 and as we head to the river the speed doesn’t shock me as it did then. We start to drop down and it feels really great. Our Quest Guest from KUAC radio is loving it. Then it all starts to go wrong. As we drop to the left and onto the river my sled veers out to the right and starts to run along the right edge of the crowd. I go to move my foot to the brake far too slowly and as I do there is a thud as we hit a small plastic pillar and the drag mat becomes detached and bangs onto my foot as it comes down.

Rob has now straightened as he is dropping onto the river and the pendulum effect swings me across the trail toward the left side of the trail. I see spectators in my peripheral vision and in particular a little girl in pink in the crowd. I try to force my foot onto the brake but the drag mat falling a matter of a second earlier has trapped my foot on the rail. I try to push my foot across but I can’t lift the drag mat far enough to get on the brake bar. All I can do push my toe onto the actual brake mechanism itself and try and force it into the ice.

Once again in my full defence the photo below has been extracted from the GoPro video showing how the drag mat is down on my foot. 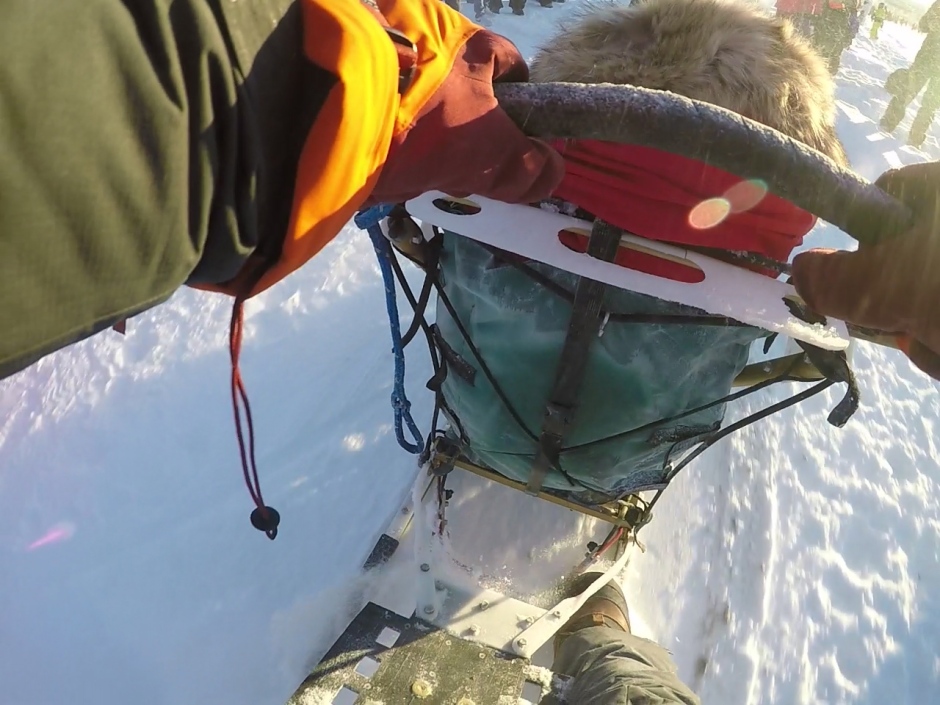 I slowed the sled a little but nowhere near enough. The musher turned and looked over his shoulder and politely suggested I might like to get on the brake. I pointed out as politely as possible that I was doing that. He then questioned whether that was really the case.

I am sure most of you have seen Donna’s video and will know the actual precise content of the brief conversation – This blog is only rated “U” and therefor I can’t reproduce the full transcript here.

We bumped, fairly gently, into a couple of spectators and then the line tugged and we were away in the right direction again.

We were on the river and all was calm and all was good. I apologised to my passenger for the bumpy ride. I worried about the little girl I caught in my peripheral vision as the sled careered across the trail and I struggled to get my foot on the brake.

But soon those negative thoughts were replaced by calm as Quest Quest and now disgraced tag sled driver looked around and enjoyed the beauty and serenity of the journey.

I have to say that there really is nothing like being on a sled running along the river. It is so beautiful and calm. Pascale’s pictures above and below do capture some of the beauty. I feel very privileged to have had the chance to do this twice. If any of you even begin to think you would like to do this then I would recommend you jump at the chance and go for it.

There have been many comments about the pink/ cerise hats we are wearing. Those are from Muktuk who supply Rob’s team food but also have a lodge and provide magical sled dog experiences (https://www.facebook.com/MuktukAdventures/ or http://muktuk.com). I can really recommend it.

Too soon it was all over. I had frozen ears. My passenger was in her transport. I was in the tag sled driver transport and the sled was on the truck and it was all over for another year. Possibly my last chance to experience it.

I worried a lot about what had happened at the start, why my sled had veered around so much and what more I could have done about it but it was over and, as Scott Chesney so eloquently put it, “you pay your money and take your chances and nobody died”.

The story continues.  So back to our truck and on to Two Rivers.