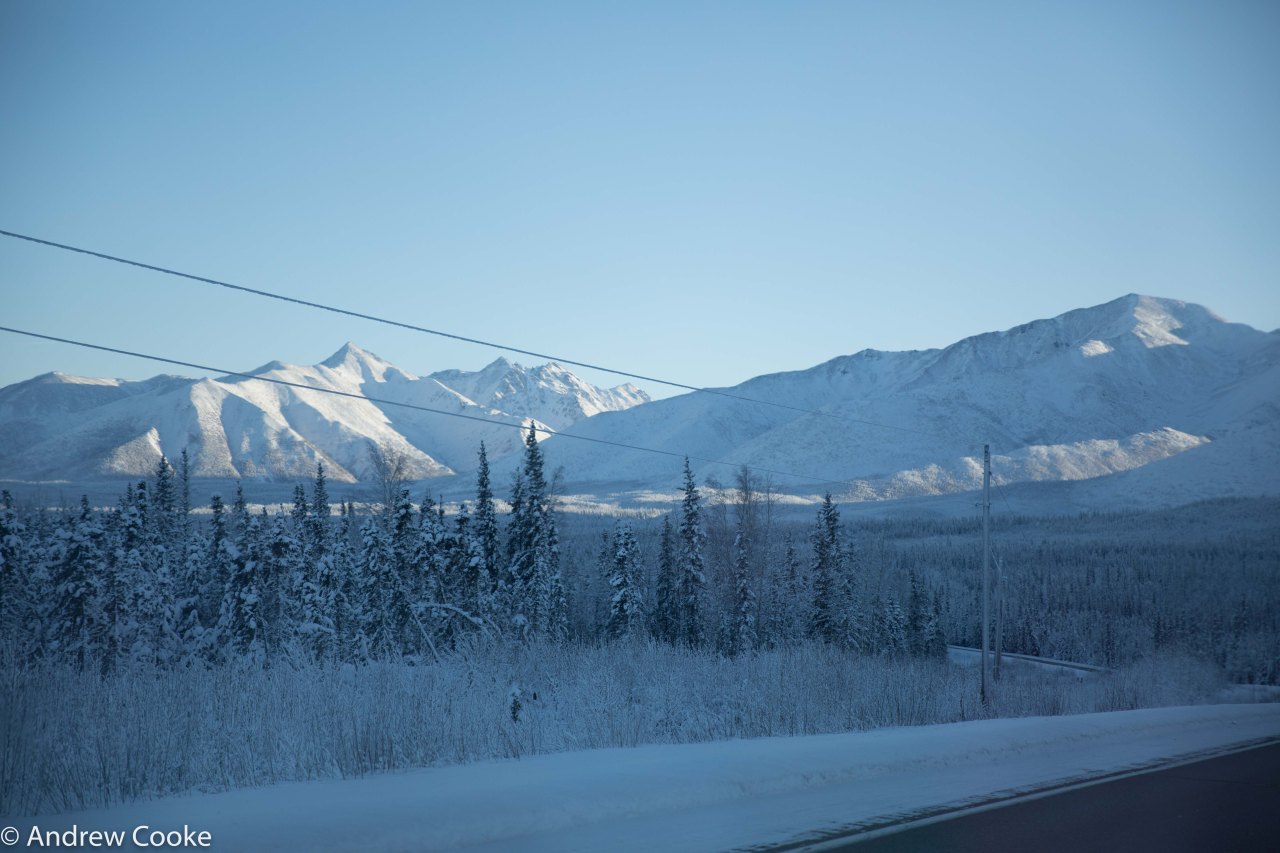 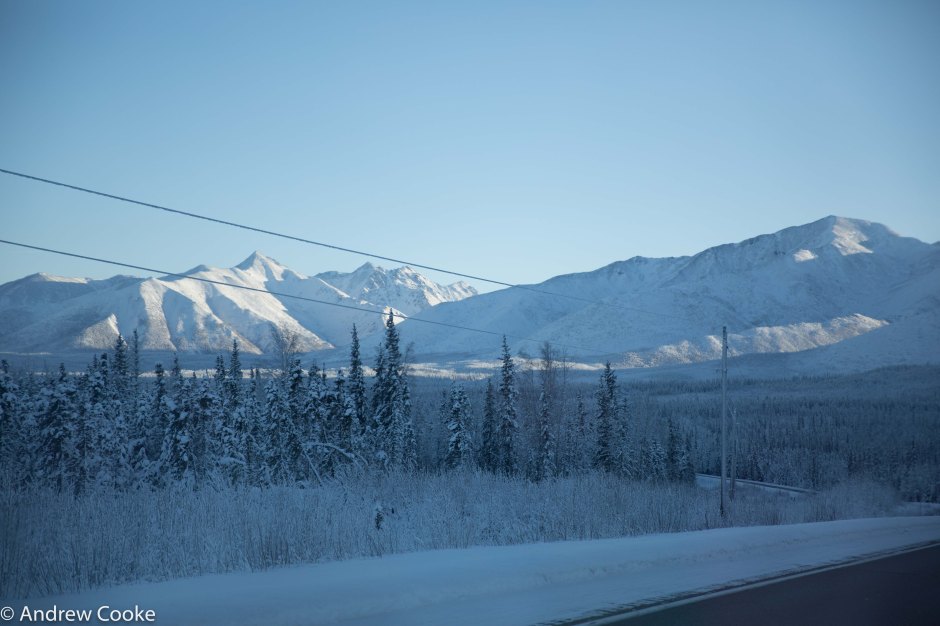 I think the each year I have posted a blog that talks about the challenge the handler has in getting from the end of the Alaskan leg of the Quest to Dawson, effectively the start of the Yukon element of the race (for the handlers at least). Obviously this trip is reversed in years when the race starts in Whitehorse.

Although it has been covered before I don’t feel it’s right to go through a series of race blogs without mentioning the huge miles that the handlers cover and the challenges they face in doing that.

So as soon as Rob has left Circle we rake up the straw, pack up our kit and his left over drop bags and hit the road as quickly as possible.

This year had two slight nuances over previous years; we had to drop Chris Waigl back in Two Rivers on our way through and we had to pick up the trailer that we had used to transport the Iditarod drop bags from their house.

Somehow I have managed to avoid the greater part of the driving over the years seemingly for a whole range of different reasons. This year has been no exception. I confess to having very limited “towing” experience so we agreed the majority of the driving from Two Rivers back to Whitehorse would be done by James. On this basis, and because Chris has a lot more experience of the Alaskan roads, she agreed to cover most of the mileage between Circle and Two Rivers.

This does not mean that I simply curl up and go to sleep in the back though. In fact I consider it my duty on these long trips to stay awake as much as possible (if not all the time) to support the driver particularly as they get tired. I know they love me chattering rubbish at them all the time!

So Chris drove first 170 miles of this journey from Circle to Two Rivers. When reporting these things I could get in to huge detail and talk about the minutia of the journey or try and stay at high level and stick to the interesting bits. Since this isn’t the first of these road trip stories we will talk about the big picture.

After the first thirty miles we return to the previous checkpoint, Central, where the Yukon Quest 300 had just completed. We ended up staying quite a while there while we refuelled and watched third to fifth in the 300 roll in. Then we headed for Fairbanks. Chris points out that the quality of the conversation along that road probably wasn’t great. I’m pretty sure she’s right but it achieved the main objective of keeping us both awake. The main drama on the journey was two specific moose encounters. We had had one on the way up but the return encounters were much closer. My role is to watch for moose from the passenger seat but Chris and I actually saw the first ones simultaneously.  The second was more of a problem and much, much closer. I was actually looking down but caught sight of her in my peripheral vision as it shot out of the undergrowth and across the road. By the time I shouted Chris had already taken evasive action and braked.  It was close but nothing compared with the encounter Louise and had in 2017 where the back of the moose actually brushed against the car.

For those in the UK that are not aware hitting a moose can be catastrophic – for moose and drivers. They are huge and hitting one is like striking a brick wall at speed. We were very lucky.

We gor to Chris and Melinda’s at Two River and after a couple of hours sleep hooked up the trailer and were away again.  The next stage is just over 600 miles to Whitehorse. As I say James has an HGV licence and is much more qualified to tow a trailer than me so he was taking the greater part of the responsibility for the driving.

Again to keep things at a high level the first leg of the journey took us to Delta Junction where there is a compulsory coffee stop at IGA and then to Tok where there is an even more mandatory stop for curly fries at Fast Eddie’s. Tok is 1/3 of the way to Whitehorse though it seems much shorter than the latter parts of the journey.

Tok to the border feels like a very long way but went by fairly uneventfully. After the border the weather started to close in on us as we passed Sheep Mountain where Rob had broken down only a couple of weeks earlier. A combination of freezing rain and snow made crossing the causeway where he had been marooned even more eery. By the time we were across the causeway the weather became very difficult with limited vision being completely obliterated when a vehicle went in the other direction blow snow up. This was tough driving for James and I felt pretty powerless to help other than try and keep awake and talk to him whether he liked it or not!

We eventually struggled to Haines Junction and Otter Falls where we decided to stop to rest. The slow going and now a planned short stop made our arrival in Whitehorse later and later. Eventually we would role in at around 5am. Louise got up and helped us to unpack. We then had a couple of hours precious sleep and we were away again.

The journey from Whitehorse was relatively uneventful other than having to go back because Louise forgot her trousers!

The one thing that stands out from each of these road trips is the way that you continually find yourself bumping into the same people over and over. This time we saw almost no other handler terms other than Riley Dyche’s and every time we stopped they were there too. Even after Whitehorse we found ourselves bumping in to them as they had also stopped for a brief overnight at Otter Falls (where we had grabbed an hour’s sleep).

The great thing is the camaraderie you build over shared experiences with other handlers, whether its from worry about dogs, worry about musher or the huge distances you cover together. 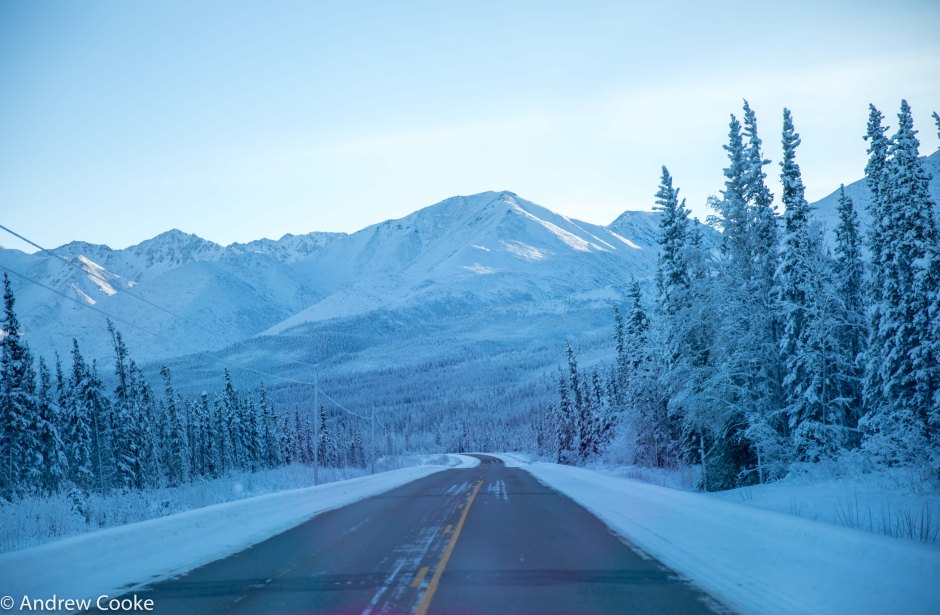 2 thoughts on “Taking the Long Road 2: Circle to Dawson”